DeFrancesco, Credited with the Resurgence of the Hammond Organ in Jazz, Passes Away at Age 51 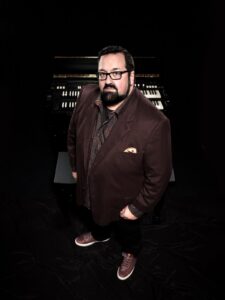 GRAMMY®-nominated phenomenon Joey DeFrancesco, who was credited with the resurgence of the Hammond organ in jazz, died on August 25 at the age of 51.

Recording over 30 albums and winning the DownBeat Critics Poll eleven times since 2005, Mack Avenue Records artist DeFrancesco was the most virtuosic and electrifying organist in jazz. In addition to his incomparable skill on the keys, DeFrancesco was also an accomplished trumpeter, saxophonist and vocalist.

“The love of my life is now in peace with the angels,” Joey DeFrancesco’s wife and manager Gloria posted on Instagram. “Right now I have very few words. Thank you for the outpouring of love and support coming in from everywhere. Joey loved you all.”

Mack Avenue President Denny Stilwell said, “He was one of a kind, in a class by himself, and the sweetest man on the planet. This is a tremendous loss and our hearts go out to Gloria and their family.”

DeFrancesco was born in 1971 to a musical family in Springfield, Pennsylvania. He played his first professional gig at age 10 and attended Philadelphia High School for the Creative and Performing Arts where his classmates included bassist Christian McBride, drummer Ahmir “Questlove” Thompson and guitarist Kurt Rosenwinkel. DeFrancesco released his Columbia Records debut album, All of Me, at age 17. While still a senior in high school, he toured Europe with Miles Davis and then joined the trumpeter in the studio to record Davis’ 1989 album Amandla.

DeFrancesco’s emergence in the 1980s marked the onset of a musical renaissance. Organ jazz had all but gone into hibernation from the mid-‘70s to the mid-‘80s until DeFrancesco reignited the flame with his vintage Hammond organ and Leslie speaker cabinet. The son of “Papa” John DeFrancesco, an organist himself, the younger DeFrancesco remembers playing as early as four years old. Soon after, his father began bringing him to gigs in Philadelphia, where he was proudly born and raised, with legendary players like Hank Mobley and Philly Joe Jones, who quickly recognized his talent and enthusiasm. With a natural gift for music, DeFrancesco also swiftly picked up on the trumpet after his touring stint with Davis as one of the two youngest players ever recruited for any of Davis’ ensembles.

DeFrancesco recorded and/or toured with his own groups as well as numerous renowned artists that include Ray Charles, Van Morrison, Diana Krall, Nancy Wilson, George Benson, James Moody, John Scofield, Bobby Hutcherson, Jimmy Cobb, Pat Martino, John McLaughlin, Larry Coryell, David Sanborn and many more. The five-time GRAMMY® Award nominee has received countless Jazz Journalist Association awards and other accolades worldwide, including being inducted into the inaugural Hammond Organ Hall of Fame in 2014 and the Philadelphia Music Walk of Fame in 2016 as well as topping the Critics Polls in DownBeat Magazine twelve times over the past fifteen years and the Readers Polls every year since 2005. DeFrancesco also hosted a weekly program on SiriusXM Radio’s Real Jazz channel titled “Organized.”

On his 2021 album, More Music, DeFrancesco, who had long supplemented his keyboard virtuoso with his skilled trumpet playing, brought out his full arsenal: organ, keyboard, piano, trumpet and, for the first time on record, tenor saxophone. He first decided to try his hand at the tenor 25 years ago. His grandfather and namesake, Joseph DeFrancesco, had played tenor and clarinet and his horns were still in the family home in Philly.

His interest in playing tenor was renewed in recent years by a confluence of factors – primarily the opportunity to record with legendary tenor titan Pharoah Sanders, with whom DeFrancesco collaborated on In the Key of the Universe.

“More music is what’s needed to create positivity and wellness for everybody, regardless of what’s happening in the world,” DeFrancesco said recently. “Music just solves a lot of problems. So more live music, more original music – just more music. Without that, we’re in big trouble.”

Statement from Christian McBride Regarding the Passing of Joey DeFrancesco:

Joey DeFrancesco was my oldest friend in music. We first met at the Settlement Music School as part of their jazz program that Mr. Lovett Hines ran, and we instantly became best friends. I was 12, he was 13. It stayed that way through our next four years together at the Philadelphia High School for Creative and Performing Arts [CAPA]. We were inseparable.

I’ve never had a problem saying that Joey DeFrancesco was hands down the most creative and influential organist since Jimmy Smith. In terms of taking the organ to the next level and making it popular again for a younger generation, no one did it like Joey. He truly set a new bar and his legacy will live on as such.