On “RETRO Trilogy,” Jazz Singer Allison Adams Tucker Zeroes in on the Three Decades of Her Evolved Freedom of Musical Expression: the ‘70s, ‘80s and ‘90s

On RETRO Trilogy, Jazz Singer Allison Adams Tucker Zeroes in on the Three Decades of Her Evolved Freedom of Musical Expression:

Will Be Released January Through March 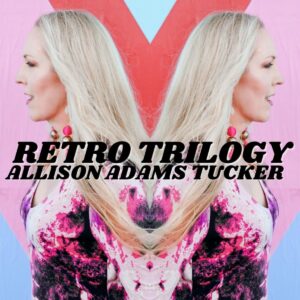 In today’s streaming world, the process to broadcast the news about an artist’s forthcoming album involves a series of catchy preview singles that leads to the actual release date of the full collection. In the case of internationally acclaimed jazz singer Allison Adams Tucker, she puts a unique twist on the model. Instead of introducing one tune, the vibrant and lucent vocalist releases three full EPs (six songs each) from January to March in anticipation of the April 14 release of her fourth CD, RETRO Trilogy on Allegato Music.

Each EP zeroes in on the three decades of her evolved freedom of musical expression: the ‘70s, ‘80s and ‘90s—from Cat Stevens to Paul Simon, from Tears for Fears to Prince, from Beck to Elizabeth Fraser with Massive Attack. From her folk-pop-punk and new wave past to her dive into jazz in 2005, Tucker says, “This album shows me stepping into music as an artist. These songs spoke to me the most.” The full album is a three-part “old school meets the digital age” jazz collection of re-imagined covers of songs that informed Adams Tucker as she blossomed into a popular singer and bandleader.

To be streamed on January 13, the EP “1977” comprises songs that held meaning to Adams Tucker as she was growing up in a musical family that surrounded her with the popular sounds of the day. “I started singing before I could talk,” she says. “The ‘70s were the beginning for me, the start of the journey. The songs in this EP were the seeds that were planted in me.”

To Adams Tucker, the love-and-beauty ‘70s was very personal—hence her inclusion of Paul Simon’s 1975 gem, “Still Crazy After All These Years,” delivered as a longing ballad. The gentle, introspective take serves as the overarching focus for the entire RETRO Trilogy.

“1977” opens with Adams Tucker taking a buoyant ride through Cat Stevens’ lyrical “The Wind” from his 1971 Teaser and the Firecat album. Her dad played the song on guitar when she was young. “That was my gateway into music,” she says. The accompanying video reflects her lifelong appreciation of nature and the elements with dramatic imagery shot on the Big Island of Hawaii.

She dreams into the 1976 Queen hit, “You’re My Best Friend,” which introduced her to Freddie Mercury. “Freddie was the beginning of my punk/new wave expression in the ‘80s,” she says.

In addition to her vocal-looped original “Wonderland”—a complex song conceived of at the Alice in Wonderland statue in New York’s Central Park and co-written with Sprague— she ends the EP with her bright, cheery rendition of Jeff Lynne’s happy tune “Mr. Blue Sky,” from Electric Light Orchestra’s majestic 1977 album Out of the Blue. (The music video for “Wonderland” will be released with the full album in April).

Known for her ability to sing in six languages, Adams Tucker committed herself to including one foreign-tongue piece on each EP. She considers herself a linguist, and since she was brought up so close to the Spanish-speaking Mexican border, it all became natural to her. “My schtick from my early years as an emerging jazz artist was to sing in different languages,” she says. “But because I love all kinds of music, I did not want to be defined by that alone, so the RETRO concept was born.”

‘’1977” highlights the Portuguese rendering of David Bowie’s 1971 tune “Life on Mars” from his Hunky Dory album. It was recomposed into Portuguese by Brazilian artist Seu Jorge for use in Wes Anderson’s 2004 film The Life Aquatic with Steve Zissou. “I loved Bowie’s music,” Adams Tucker says. “It was quirky, out of the box and the first I encountered to make a statement that pop music could be fine art. What Seu did with ‘Life on Mars’ was to make it a classic love song for the film.”

“1988,” to be released on February 10, opens with the spirited, Latin-infused “Bamboleo,” sung in Spanish in reference to the Gipsy Kings’ 1989 breakout hit. It’s a delightful rendering with an upbeat vibe and killer Hays and Silberstein piano-guitar solo exchanges. “The title means ‘sway’ in English,” she says. “It’s the embodiment of the love for music and dance in Latin American culture that exists in everyday life.”

The ‘80s shined as a rich period of pop music. Adams Tucker taps into that with romantic jazz-flavored covers of Peter Gabriel’s hit “In Your Eyes” and the Cure’s “Lovesong,” written by Robert Smith as a wedding gift to his fiancée. And Adams Tucker pays tribute to Prince, among pop star royalty of the ‘80s, with a somber take on his rare beauty, “Sometimes It Snows in April.”

“I was a Prince devotee,” Adams Tucker says. “I saw him live many times and even met him in Minneapolis. This is one of his lesser-known songs written about his character, (Christopher) Tracy, who died in April in the final scene of his second film Under a Cherry Moon. Interestingly, Prince also died in April, so this song has felt like a eulogy.

One of the most important songs of “1988” is the beauty “Woman in Chains” recorded by Tears for Fear on its 1989 The Seeds of Love album. It was written by Roland Orzabal with vocals by Oleta Adams and was championed at the time as a feminist anthem. But Adams Tucker says that the song pays attention to a poignant side that includes domestic abuse and human trafficking. “I sang it to bring attention to that dark topic in respect and love.” She adds that the video for the track puts an inspirational spin on the subject with an emphasis on empowerment.

The last EP, “1999,” to be released on March 10, rolls out with a huge splash: Adams Tucker’s fun romp through Beck’s “Tropicalia” from his 1998 Mutations album. It’s his observations on Brazil complete with Adams Tucker’s fully arranged spins. It’s funky, cool, raw and features her opening with a startling vocal distortion. She happily says that the supporting video is “hallucinogenic.”

Another highlight is Adams Tucker’s vivid, balladic version of Annie Lennox’s “Why” from her first solo album, Diva, in 1992. “She’s my female David Bowie,” she says. “We slowed down the tune. It’s a tearjerker for me.” She also puts new life into electronica trip-hop Massive Attack’s “Teardrop,” with a grooving beat by Bashiri Johnson on percussion and Kenny Wollesen on vibes. The song was built on a sampled riff with melancholic lyrics composed by former Cocteau Twins’ singer Elizabeth Fraser. She based the song partly on her fascination with French philosopher Gaston Bachelard’s 1942 essay “L’eau et les rêves” (Water and Dreams).

Other tunes include the hummable “Birdhouse in Your Soul” by the nerdy, quirky band They Might Be Giants and John Ondrasik’s profoundly reflective “100 Years” (only included on the EP). As for the foreign-language number, Adams Tucker scats and sings in French to the engaging Sting/Dominic Miller tune, “La Belle Dame Sans Regrets,” which was used as a protest against France’s above-ground nuclear testing that thankfully ended in 1996.

“It’s my homage to beloved Paris, and a slightly political moment on the album,” says Adams Tucker, who has a strong audience of French lovers worldwide thanks to her interpretation of “La Vie En Rose.” The 2009 soundtrack of the popular video game “The Saboteur” included Adams Tucker singing another French song unavailable to the public, and this caused “La Vie en Rose” to go viral in the gaming community, garnering Adams Tucker significant worldwide downloads and streams that continue today.

In many ways, RETRO Trilogy is a healing tool for Adams Tucker, a reflection of beautiful and meaningful times. She says, “It’s retrospective, but also represents a look ahead.”