On The Next Door, Julia Hülsmann Returns with the Quartet from 2019’s Not Far From Here, and Presents Her Unique Pianistic Voice in a Varied Program of Almost Exclusively Original Music 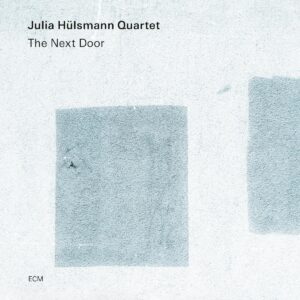 “Our various responsibilities within the quartet are more open and free than in the trio. Even though there’s an additional player, assigning stricter roles isn’t necessary. There’s plenty of room for me to move around on piano, manoeuvre from contributing unison lines to melodic accompaniment, then switch to playing basslines – all seamlessly, because we are always listening to each other. That’s our first and foremost priority” – Julia Hülsmann

The follow-up to 2019’s Not Far From Here sees Julia Hülsmann reconvening with the same line-up as last time, in Studios La Buissonne, and entering into intense interplay with a band that has been extensively worked-in on the road. The Guardian called the quartet’s debut “a standout, for understated reinvention of the familiar and cool virtuosity” and spoke of “clever, thoughtful, inquisitively contemporary jazzmaking.” These virtues have been further refined and new idioms added to the blend on the quartet’s second stance, with each member – tenor saxophonist Uli Kempendorff, Heinrich Köbberling on drums, Marc Muellbauer on bass and Julia – contributing original material to The Next Door.
“Since the last album we’ve been on the road a whole lot,” Julia notes. “We’ve had time to further develop our rapport as a quartet and, as a result, our interplay has become even more intuitive.” Even when most live-activity was intermittently shut down, Julia and her quartet participated in alternative performance projects and spent many weeks vigorously rehearsing new material. The fruit of their labour, presented on this album, is as multi-facetted as it is uncompromising, with a strong emphasis on an intimate ensemble sound. Flashes of jazz’ tradition, somewhere between ’60s modal customs and post-bop swing, pull through The Next Door like a guiding light, but it’s how the group subsequently transforms these notions and makes them their own that stands out.
“Empty Hands,” the album’s pensive opener, is a blank canvas, gradually filled in with tender key strokes, searching melodies and delicate accompaniment. As Julia, who wrote the song, explains: “When your hands are full, you have to juggle everything back and forth, you’ve too much to deal with simultaneously. Empty hands, on the other hand, are like a clean slate – you have all the possibilities in the world to do what you please”. “Made of Wood” contrasts this impressionist design with an earthy tone, set in a modal frame and propelled forward by straight-ahead swing: “Time and again I feel like writing something solid, conciliatory in a way. This piece refers to my inner foundation, which I associate with something made of wood, something comforting.”
The pianist’s brief duo exposition in exchange with saxophonist Uli Kempendorff on “Jetzt Noch Nicht” – later reprised as a variation with all members of the group – is a moody theme with a twisty melody, inviting the players’ most expressive playing. On Julia’s “Fluid” the band presents a tight, spirited unit in a mesmerizing performance of a smooth, steadily crescendoing arc: “This piece is based around the thick, layered piano sound that’s introduced after a couple of bars. Melodies can crystallize over this fluid tapestry and flow on in waves. Water is an important element to me, which frequently appears in my images.”
Uli’s warm tone complements Julia’s trio with exceptional warmth, entering into a natural symbiosis with the piano’s subtle action, and his own piece, “Open Up,” is among the set’s highlights: “When writing ‘Open Up’ I was exclusively focused on the melody’s forward-motion. The line dancingly weaves its way through three octaves. The bass part is notated and creates a counterpoint, while piano and drums are free to interject, comment and mingle at will. There’s much room for free interpretation and alteration throughout.”
Marc Muellbauer’s compositional contributions go through various pulsations – “Polychrome” being a rubato exercise built around a, mostly, diatonic melody that wants to escape its tonal framework. “Wasp at the Window” on the other hand finds the group conspiring in an extensive workout in nine-time with an ostinato bending and bulging to the quartet’s beat. Again different by design, Marc wrote the bossa nova “Valdemossa” with composer Frédéric Chopin in mind: “It is based on the harmony of Chopin’s well-known Prelude No.4 in E Minor, from his cycle of 24 Preludes, op.28. I wrote a new melody expanding the harmony’s chromatic suggestions and exploiting its ambiguity in modulating into two other, far removed keys. It is named after the beautiful place in Mallorca where Chopin wrote his piece…”
With a playful and slightly deconstructed inclination, drummer Heinrich Köbberling’s first original in the programme, “Lightcap,” initially suggests the sketch-like framework of a Paul Motian tune. Actually, the piece is inspired by Köbberling’s early trio endeavours in the ’90s with saxophonist Lisa Parrott and bassist Chris Lightcap, giving the song its name. The drummer’s other composition is “Post Post Post” – a subtle group improvisation with a veiled melody that has occupied the drummer for several years.
It has become customary for Julia’s records to highlight revamps of known songs from the pop world and with Prince’s “Sometimes it Snows in April” the quartet uncovers another neat treat. The piece’s catchy melody, immediate harmonic hook and laid-back groove are thoughtfully explored by the entire band, with Julia’s gentle touch at the centre of attention.
The Next Door, recorded at Studios La Buissonne in the South of France in March 2022, is issued as the quartet embarks on a European tour, with concerts in Germany, Switzerland, Austria and Norway. 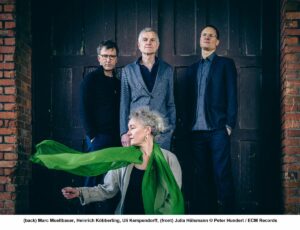