Mathias Eick | When we leave | Available September 24 via ECM 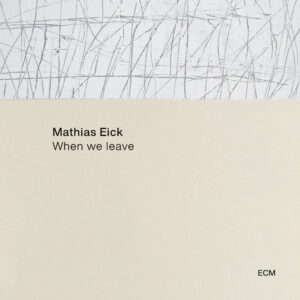 Skala (recorded 2009 and 2010), for instance, introduced the two-drummer format, latterly a hallmark of much of Eick’s work. Midwest (2014), a meditation on the voyage of Norwegian music to North America, brought violin into the ensemble sound along with colours and textures from folk music. Ravensburg (2017) turned the spotlight on Eick’s own biography, looking, with affection, at his Norwegian and South German family roots. The full group heard on Ravensburg returns for When we leave, augmented by Stian Carstensen’s pedal steel guitar – last heard in an Eick context on The Door – and the saga continues.