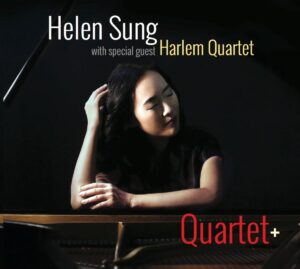 Pianist/composer and 2021 Guggenheim Fellow Helen Sung celebrates the work of influential women composers on her latest album Quartet+, crafting new arrangements of tunes by Geri Allen, Carla Bley, Mary Lou Williams, Marian McPartland and Toshiko Akiyoshi while carrying the tradition forward with her own stunning new works. Co-produced by violin master Regina Carter, the album pairs Sung’s quartet with the strings of the GRAMMY® Award-winning Harlem Quartet in an inventive meld of jazz and classical influences.

Available September 17, 2021, on Sunnyside Records, Quartet+ was conceived and produced during the Covid-19 pandemic and made possible by a grant from the NYC Women’s Fund for Media, Music and Theatre with additional support from the Aaron Copland Fund for Music and the Queens Arts Council. It allows Sung, who also studied classical violin, to realize a long-held dream of writing for strings while maintaining the improvisatory spark of her stellar quartet, featuring saxophonist and flutist John Ellis, bassist David Wong, and drummer Kendrick Scott.

The double quartet format is the latest evolution of Sung’s career-long search for inspiration beyond the boundaries of jazz. Her classical background emerged before on 2007’s Sungbird (After Albéniz) – the title track of which is reprised for Quartet+ – a thrilling dialogue between modern jazz and 19th century Romanticism. Her most recent album, Sung With Words, incorporated the words of poet Dana Gioia, while upcoming projects delve into the pianist’s Asian-American heritage and the intersection of jazz and neuroscience.

While the Houston native veered away from her classical training after undergraduate studies at the University of Texas at Austin, Sung admits that the early influence has maintained a strong pull on her musical thinking. “I guess I can’t escape my classical heritage,” she says with a laugh. “It’s definitely part of how I hear and how I write.”

It also gives her a connoisseur’s ear for the many ways in which jazz and classical music have converged, not always successfully. “Since I also studied violin, I’m really picky about how I want it to sound in a jazz setting,” she explains. “When I first heard Regina Carter she was playing with Kenny Barron at the Blue Note, and I remember thinking, ‘That’s how I would want to play jazz violin.’ When I heard the Harlem Quartet I had that same feeling.”

Sung crossed paths with the acclaimed quartet during a cross-genre performance with clarinetist Eddie Daniels at Jazz at Lincoln Center in 2018. She immediately approached the musicians after the show to suggest a collaboration. The opportunity came with the NYC Women’s Fund grant, which also gave the project a direction Sung had not previously ventured into with her own music, following on work undertaken with Terri Lyne Carrington’s Berklee Institute of Jazz and Gender Justice and Roxy Coss’ Women In Jazz Organization.

“In the past I tried to avoid the whole ‘women in jazz’ thing because I felt music should speak for itself,” she says. “But as I’ve gotten older, I’ve begun to feel that’s not the most complete way to deal with it. So I’m starting to grapple with the issues, and will do my best to approach things with honesty and candor.” 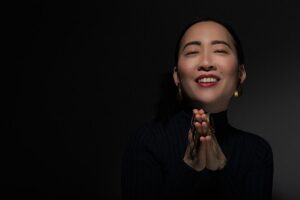 It’s hardly the first time she’s explored the work of the composers represented on Quartet+, however. In 2007 she won the Kennedy Center’s Mary Lou Williams Jazz Piano Competition and has since paid tribute to the history-spanning pianist at Harlem Stage and on NPR. She was a guest on Marian McPartland’s revered Piano Jazz in 2006 and has performed in tributes to Geri Allen in the wake of Allen’s untimely death in 2017.

Allen’s “Feed the Fire” begins the album in dramatic fashion, with a striking new counter melody added to the original’s blistering rhythms. Williams’ “Mary’s Waltz” is refashioned in a way that draws from the classical tradition as well as the blues, a multi-faceted approach that the history-spanning composer would surely have appreciated. Sung heard a symphonic element to Akiyoshi’s “Long Yellow Road” which she elaborated on in her arrangement, while “Wrong Key Donkey” vividly captures the originality and eccentricity of Carla Bley’s complex whimsy.

Sung’s homage to McPartland fuses a string quartet rewrite of “Melancholy Mood” with a group improvisation on “Kaleidoscope,” the theme from her iconic radio show. These pieces are interspersed with snippets of Dr. Billy Taylor’s “A Grand Night for Swinging.” Sung discovered the piece from a Mary Lou Williams’ recording, and decided to add it to honor Taylor’s early championing of female jazz musicians, which included founding the Mary Lou Williams Women In Jazz Festival.

In addition, Sung’s original composition “Coquette” was inspired by one of German composer Clara Schumann’s “Romance” pieces, with Ellis’ playful, lilting flute flirting with the elegant strings. “Lament for Kalief Browder,” dedicated to the Bronx teenager who committed suicide following his arduous three-year imprisonment without trial at Rikers Island, was previously recorded on Sung With Words. Sung had long envisioned the piece with strings, realized here in a breathtaking rendition. “Sungbird,” meanwhile, is reimagined from the original’s Latin-inflected jazz quintet version as a passionate dance sans drums.

While the entire album was created during the pandemic, the two-movement “Temporality,” a Jazz Coalition commission, directly addresses the strange year (and counting) we’ve all just come through. “The way I experienced time became very elastic during the pandemic,” Sung says. “Each day felt interminably long, one blurring into the next, and then suddenly an entire month had passed! ‘Time Loops’ is about that, while ‘Elegy for the City’ is my lament for the terrible human loss suffered by New York and other cities.”

Despite the stresses of the pandemic, Sung is enjoying a particularly fruitful period, with several fascinating projects in the works aside from the release of Quartet+. She’ll apply her 2021 Guggenheim Fellowship to a multi-movement piece for big band slated for completion in 2022. With a Chamber Music America Digital Residency grant, she’s producing a series of events this year using the tragic recent attacks on the AAPI community as a catalyst for interdisciplinary events with her quartet and a poet, a DJ and an installation artist. Sung also received a New Music USA 2021 Music Creator Development Fund grant for a collaborative project with dancer and neuro-rehabilitation researcher Miriam King to create a dance program with original music for dementia/Alzheimer’s patients. Sung remarks, “If I’ve learned anything this past year and a half, it’s to not take anything for granted, be it people, relationships, opportunities…so I’m jumping in with arms wide open. I want to swallow life whole!”