Eberhard Weber | Once Upon a Time | Available November 11 via ECM

with His Release Once Upon A Time 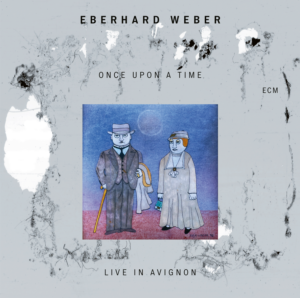 Once Upon A Time – Live in Avignon presents Eberhard Weber on a rare evening in southern France in the midst of an adventurous series of solo bass concerts in 1994. This particular concert took place as part of the Festival International De Contrebasse, organized by Barre Philips. Reviewing one of Eberhard’s solo events that year, the Financial Times called him “an exceptional bass player [who] can shine in all styles” and went on to claim, “it is hard to imagine that anyone else could play what Weber plays.”

Throughout the years, the bassist indeed has proven time and time again of a particularly unique musical vision that can not only be traced back to his singular use of effects and his signature five-string bass hybrid, but also draws on his personal background. In a conversation with Bass Player Magazine in 1994, Eberhard explains, “When I was young, I envied all the American jazz players and wanted to play like them, without thinking too much about my roots – but they kept seeping into my music. Over the decades, I came to realize that I am a European. My family is European and I grew up listening to European classical music. I’m classically trained; that’s my background. So I’m not a jazz bassist – I play European improvised music!” This special act of embracing his own personal voice is among the things that separate the bassist from others.

Much of the music performed on Once Upon A Time draws from Orchestra (1988) and Pendulum (1993), the two albums that preceded Eberhard’s 1994 tour. Both recordings dealt with the variety of sounds he could possibly create, only using the bass. While on the first of the two, Eberhard focused on music he would be able to recreate live, Pendulum saw the bassist using overdubs more frequently, explaining in the press release at the time: “More than ever I am interested in the end product, and for quite some time now I have been free from the need to prove that one person can do it all.”

And yet, with Once Upon A Time Eberhard Weber does exactly that: by combining the harmonic breadth of Pendulum with the textural quality of Orchestra in a live situation, the bass player delivers a compelling demonstration of the musical possibilities with one single bass performed live. Small electronic manipulations support him in the process. At the time the Financial Times observed, “the five string contraption has no body but is played through an electronic ‘delay’, controlled by foot pedals. This gives Weber the ability to play a five-second sample, which repeats ad infinitum and onto which phrase after phrase can be pasted. In short, Weber improvises to his own accompaniment, setting down slavish rhythm, chords and harmonies, creating a live dialogue with himself.”

Several pieces on the album benefit from loop-based accompaniment provided by the delay – “Trio for Bassoon and Bass” and “My Favorite Things” included. Both the multiple-subject-spanning Eberhard-original and the standard are interspersed with layered strumming patterns, chordal structures and steadily intensifying improvisations. Both pieces are new to the bassist’s recording catalogue. As the standard unfolds, its harmony altered by the consistent loop, Eberhard’s command over the music and his instrument becomes evident. On “Delirium” too, Eberhard uses a loop foundation for extensive explorations up and down the neck – a healthy share of overtone investigation included. Other performances are less reliant on effects and leave room for freer approaches to time and harmonic development. “Pendulum” reveals triad-based patterns, setting a reflective mood that “Silent for a While” and “Air” pick up, develop and transform with discerning linear movements across the strings. In contrast, “Ready Out There” concentrates around the bassist’s more physical instrumental prowess.

Once Upon A Time Live in Avignon is filled with jewels from one of Eberhard Weber’s most prolific periods and captures one of the bass player’s especially successful solo concerts. The album was recorded by Gérard de Haro at the Théatre des Halles in Avignon, France on 9 August 1994 and mixed at Studios La Buissonne in May 2021.

Eben Weber | Once Upon A Time