He Recorded for Japanese King Records 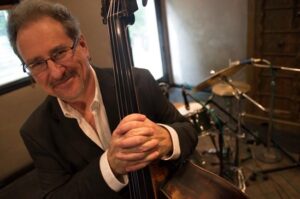 Respected bassist-leader Brian Bromberg has been a busy sideman and producer for many years, working with such renowned artists as Stan Getz, Diana Krall, Freddie Hubbard, Jeff Lorber and many in the smooth jazz/contemporary jazz space. Along the way, Bromberg has built up a sizable solo discography, up through his 2021 pandemic-period album A Little Driving Music.

His discography expands retroactively with the forthcoming digital reissue of five albums, recorded between 2003 and 2011 for the Japanese King Records label and made widely available only this year. As a whole, the handful of archival projects — including his ambitious solo bass album Hands, the jazz-revised classical collection A Bass Odyssey and three group sessions under the title The JB Project: Brombo — fills a gap in Bromberg’s recorded legacy and broadens the overall profile of his creative energies and talents.

Bromberg, who has also worked on the business side of recording industry in the past, is taking charge of the reissue project, with freshly remastered tracks which mostly showcase his acoustic bass playing. In part, the effort rises out of a desire to have valuable past work unearthed and made available on the market.

“When you do something that you’re proud of and it sits on a shelf and doesn’t get released, it’s very frustrating,” Bromberg says. “So it’s doubly exciting that I can now get this out to the world and people can actually hear it now. Whether they like it or not is entirely up to them, but at least I feel good about the fact that at least it’s out there.”

Bromberg’s strong ally at King Records was Susumu Morikawa, head of the jazz division, who often suggested varied, inventive themes for Bromberg’s albums. The “JB Project” started as a collaboration with famed Japanese drummer/composer Akira Jimbo — the “J” of the acronym — whose resume includes work with the noted fusion band Cassiopeia. On the three volumes of music, under the heading of “Brombo,” the central players were joined by keyboardist Otmaro Ruiz on each session, with celebrated Bromberg keyboardist comrades Patrice Rushen and Jeff Lorber appearing on the third release.

Material-wise, tunes range from originals to covers from jazz and pop sources, including “Giant Steps” and Seals and Croft’s “Summer Breeze” on the first album, “Nardis” and Sting’s “Fields of Gold” on the second and Herbie Hancock’s intricate “Actual Proof” and the Eagles’ “I Can’t Tell You Why” on the third. Bromberg recalls that the “JB” recordings were “really fun, because they were just things that I never would’ve thought of or never would’ve done, with some different types of arrangements. The records did really well in Japan. We talked about it and picked some tunes in advance, but it’s not like we rehearsed. Akira came in from Japan, we recorded it live.”

Speaking of Brombo titles, Bromberg asserts, “I’m really excited to get those records out in this country because I think there’s some really decent music on there. There are some good tunes and really good playing. Otmaro’s amazing. A lot of people in America are not familiar with Akira. I get to expose, you know, this talented guy to America and also just get some of this music out.”

At Morikawa’s request, Bromberg turned his attentions to music from the classical canon for A Bass Odyssey, on which he blends bass, piccolo bass (with a higher, guitar-like register, it’s a unique voice on the bass that Bromberg has mastered, especially as a soloing voice) and drums—on which the leader also does the honors. Strauss’ Also Sprach Zarathustra, immortalized in the film 2001: A Space Odyssey, kicks of a selection also touching on such classical playlist favorites as Ravel’s Bolero and Beethoven’s “Ode to Joy.”

“I used to play a lot of classical music when I was young,” Bromberg says. “The project was cool because it really pushed me out of my comfort zone. I had to figure out how to do things and make them work as a jazz player and as a bass player and, and to make it unique. It was just cool to take some of these popular things and just do a different twist on them. It’s a record that it’s really all over the map, but when you look at it, it’s like a coffee table book of short stories, all played by this bass player.”

Hands involves a very different challenge and focus, as an entry the rare art of the solo bass record. After battling nerves about the idea of going solo, Bromberg recalls getting into the studio and diving in with an open musical mind. He started wisely, with the familiar standard “Stella by Starlight” and ended up covering a broad, 18-track swath of material, from “Teen Town” (sounding fresh on acoustic bass), to the Police hit “King of Pain” and Dave Brubeck’s “In Your Own Sweet Way.”

“I’m really glad I did the record,” Bromberg says. “I don’t know if I’ll ever do another solo record just because you gotta be on your game. It’s live. You can’t fake it. It takes a lot of focus to really nail the performance and nail the pitch and get it right. It was a wonderful experience. That’s off my bucket list and now I’m good. Maybe someday, if I have the nerve, I’ll do it again.”

On a larger scale, Bromberg is enthusiastic about his digital rebirthing endeavor. “The thought of this music going out to the world is a very rewarding thought,” he says. “You want people to hear what’s in my heart, and the passion and the intensity and the honesty.”