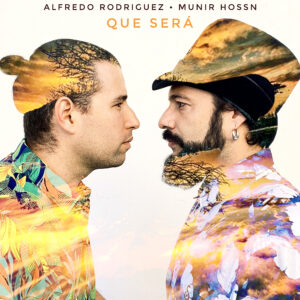 Since the 16th century, the phrase “que será” has served as a motto for human existence in times of uncertainty. Not knowing the next step or the outcome of an unexpected situation can place anyone’s mind into a frenzy, making hope and optimism far from the first thought. Pianist/composer Alfredo Rodriguez has had time during the pandemic to reflect not only on the fragility of life but the importance of looking into the future with rose colored glasses and embracing the unknown.

“Que Será” (out now via Mack Avenue Records), the newest single from the Havana-born composer, was originally conceived in a hotel room while on tour with his longstanding musical partner Munir Hossnand revisited and completed by the duo in the midst of the global pandemic. “We wanted to bring joy to the world in this difficult time in any way we can,” says Rodriguez. “Munir and I hope people will find solace in this music and look forward to a brighter future together.”

Their mission, which is evident by the uplifting lyrical content, is to plant a seed of hope during this time of loss and allow the heart to flourish with aspirations for the future. The chemistry between the duo is ever apparent, with Rodriguez at the helm of a new creative breakthrough and evolution of his music that has enthralled audiences worldwide.

Alfredo Rodriguez is an internationally acclaimed Cuban jazz pianist who, due to his formal training, is as proficient at playing classical music as he is his chosen genre. Rodriguez was born into a musical family, his father a popular singer and TV host. A child prodigy, he studied classical piano at the prestigious Conservatorio Amadeo Roldán and Instituto Superior de Arte while playing popular music in his father’s orchestra by night. While performing at the Montreux Jazz Festival in 2006 he was discovered by his future mentor and producer, the legendary Quincy Jones. In the past 15 years, Rodriguez has released five albums as a leader to critical acclaim and has performed at Playboy, Detroit, New Orleans, Newport, San Francisco, North Sea, Umbria and Vienna Jazz Festivals as well as prestigious venues worldwide.