Chronicling Reality of the American Dream 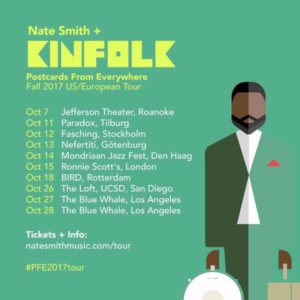 “Nate Smith has it all: power, finesse, style and beats for days.

He is truly one of the finest drummers in the world whether playing jazz,

“…this record shows how remarkable a composer, bandleader,

and beautiful textures, this is one to enjoy over and over again.” – Chris Potter

starts with a conventional pattern, then disrupts it by adding an

extra hiccup of a beat. Just that slight modification gives the

“…his drumming is a marvel unto itself. Humid and

broad of palette, it has the rare ability to dial up the complexity and

the sensitivity at the same time.” – The New York Times

“…a one-man band on drums and programming…” – Village Voice

“Inspired by the golden age of instrumental R&B,

feeding from its leader. – NPR “Jazz Night in America”

“Smith embodies taste and chops in one package, ideas to spare,

the new century’s pop music to get into the art form.” – PopMatters

“Whether blistering beats or soloing fusillades of hot sticking phantasms,

Smith’s goal was telling his unique story, one era at a time.” – DownBeat