Ivo Perelman Expands on His 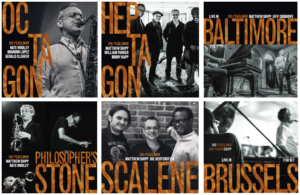 In a career that now numbers more than 80 recordings under his own name, Ivo Perelman has established a variety of new benchmarks. He has developed an unsurpassed facility for integrating the tenor saxophone’s extra-high altissimo octaves with the instrument’s conventional range, bringing a new edge and polish to the concept of extended technique. To an extraordinary degree, he has engaged in the daredevil pursuit of utter spontaneity, in stupefying cogent recording sessions that start and end without written compositions or thematic elements, harmonic frameworks or preset tempos. He has assembled a world-class workshop of like-minded musicians on whom to draw for each new project, evincing a sorcerer’s touch for mixing these “ingredients” in novel ways and he has resorted to releasing several albums simultaneously, in order to keep pace with his runaway imagination and productivity.

In this latest fusillade of simultaneously released albums, Perelman places his saxophone in familiar settings as well as new ones. The familiar include his longstanding duo with pianist Matthew Shipp and other frequent colleagues. But this group of albums also features four musicians with whom Perelman had never performed with before these recordings, which signals a turning point in his work. One of these new associations–with trumpeter Nate Wooley, acclaimed for his solo trumpet recitals and mastery of “extreme sound”–marks the first time Perelman has ever employed the tenor-and-trumpet context that has characterized so many jazz groups.

“This has never happened with me,” marvels Perelman, whose artistic philosophy requires an almost telepathic communication among collaborators. “Now I’m opening up to every musician on earth. It’s like a rebirth–the beginning of a new phase. It’s not that I have exhausted the musical potential with my favorite gang. But it’s time to expand and this will reflect a growth within my gang. If you socialize and talk with other people, it’s good for your old friends too.”

The “new friends” include the septuagenarian percussion marvel Bobby Kapp (who appeared with Perelman and Shipp just once, on the 2017 album Tarvos) and two lesser-known drummers: the Baltimore-based Jeff Cosgrove and the German-born Joe Hertenstein. In addition, Gerald Cleaver, one of Perelman’s favored drummers, returns to anchor a pianoless quartet featuring two horns. “With every new batch of recordings, I always try to focus on some different methodology, so I derive more learning in each batch. And what I learned here is: What a difference a drummer makes. In this batch Matt snd I are confronted with a variety of drummers, and I can see what that does to our relationship,” states Perelman. Perelman has long marched to the beat of a different drummer, but that proves especially true on these discs.