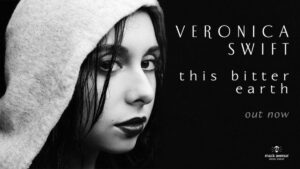 “She has a miraculous voice, musical ability and technique,

as well as an innate gift for entertaining a crowd.” — Wall Street Journal

Veronica Swift flips the script on This Bitter Earth, the captivating follow-up to her 2019 Mack Avenue Records debut, Confessions. Whereas Confessions played out like pages from her personal diary, on the new album, the 26-year-old singer and master song interpreter looks outward while addressing social ills that plague the world today.

This Bitter Earth, available now on Mack Avenue Records, takes on the song-cycle characteristics of such classic LPs as Marvin Gaye’s What’s Going On, Kate Bush’s Hounds of Love, and Mary J. Blige’s My Life. For her album, Swift tackles sexism [“How Lovely to Be a Woman”], domestic abuse [“He Hit Me (And It Felt Like a Kiss)”], racism/ xenophobia [“You’ve Got to Be Carefully Taught”] and the dangers of fake news [“The Sports Page”].

Critical Acclaim for This Bitter Earth:

“Swift gets both dramatic and slyly witty, taking on sexism directly with her

unrestrained makeover of ‘How Lovely to Be a Woman’…” — Glide Magazine

“It’s as good a job of reconciling the past and the present as I have ever heard,

toward making sense out of a world gone wacko.” — Wall Street Journal

“Veronica Swift is a woman of many voices, and she uses every one of them to

refract a dizzying kaleidoscope of moods on ‘This Bitter Earth…’” — DownBeat

“‘This Bitter Earth’ is more universally-minded as she tackles

“…recontextualizing decades-old lyrics has led the

Charlottesville-bred jazz vocalist to a point of historical confluence,

one where classic songs now take on a renewed relevance.” — The Daily Progress

“…it takes an artist of sure and rising stature to curate

one hell of a coherent protest album.” — All About Jazz

“…a jazz lioness with a pure tone, large lungs, a knowing sense of

repertoire, and sure swing style.” — JazzTimes