Blends Raga and Jazz on Isabela,

Available May 13 via ECM Records 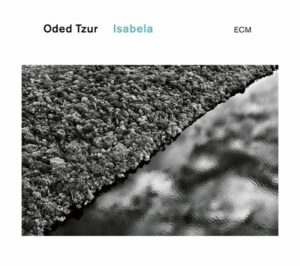 On his follow-up to Here Be Dragons New York-based saxophonist Oded Tzur and his collaborators apply their subtle dialect in a more intense space, exploring the nuances and colours of the saxophonist’s self-fashioned raga in a suite-like sequence of quiet meditations and powerful exclamations. Throughout Isabela a heightened sense of urgency prevails, as Oded returns with his unaltered quartet to weave one underlying musical idea through a series of elaborate and impassioned designs. Since their debut appearance for ECM, the group’s interplay has grown more intimate on the road and the deep trust between the leader and his accompanists is a driving and binding force behind the music’s conceptual scope.

Oded has carved out a particularly idiosyncratic approach to composing on his musical path, blending raga and jazz in a way where the saxophonist is neither borrowing nor imitating musical idioms from elsewhere, but rather applying a comprehensive music-philosophical concept on a universal level. As Oded figures, a raga goes beyond a set of parameters bound to time signatures or notes: “One way to define a raga is to see it as an abstract personality that’s made of sound. Some musician would even refer to it as a presence that you have to make come alive. That’s where it’s not a scale anymore, but something so much more than a sequence of notes. In that sense, the blues is exactly like a raga. It has a scale, but it’s not simply a scale. It’s an abstract personality that is so distinct that you can hear one phrase of it and already go: ‘That’s blues’ – like a person you recognize from afar.”

Once again joining Oded on his musical journey are pianist Nitai Hershkovits, bassist Petros Klampanis and drummer Johnathan Blake, who infuse the leader’s inventions with effortless musicianship and vivid imagination. Each a pillar in the contemporary jazz scene and with links reaching beyond the genre’s traditional format, the saxophonist’s collaborators are given “freedom to develop the music any way they want,” within the structures and possibilities the compositions offer. The group is constantly discovering new ways to communicate with each other and expand their musical vocabulary in the process: “It’s like we’re on a river with trees around the banks, so we can’t really make out where we’re headed, but we can be sure that it will lead us someplace good.” That place is marked by Nitai’s delicate brush strokes on piano, Johnathan’s fierce and confident percussion work and Petros’ more than reliable foundation in the deep end.

Downbeat has described Oded’s playing as “quietly fantastical and full of narrative feints” while outlining his tone as “light and sweet, with a whispered airiness,” and the saxophonist’s note-bending, microtonal technique, inspired by Indian classical instruments and touching the “barely audible,” is again at the heart of his voice and the melodies that protrude on Isabela.

The raga that pervades the album from start to finish is introduced in the opening act “Invocation,” which works like a Chalan in Indian classical music – the skeleton of a Raga that outlines the raga’s structure in the briefest possible way, much as a synopsis does a play. Oded and his quartet develop the concentrated musical matter of “Invocation” and transform it into new shapes and forms in expansive studies of temperament, shifting from pensive introspection in one moment to outgoing and free-wheeling improvisation in the next. “It took me a while to develop the courage to also explore the other extreme, see what happens when you follow the explosion at the other end of the dynamic spectrum. For this album I finally felt comfortable to explore the totality of the dynamic range, the silence but also the eruptions, the bright colours.”

Neither the silence nor the bright colours that immerse the album in manifold shades could emerge without the distinctive contributions from Oded’s fellow travellers and the group’s performance is highlighted by the crystalline acoustics of the Auditorio Stelio Molo RSI in Lugano, where the album was recorded in October 2021.

Isabela was produced by Manfred Eicher.