More Than Three Decades as a Trio

Perpetual Pendulum Due Out

Album Marks Homecoming for the Trio, 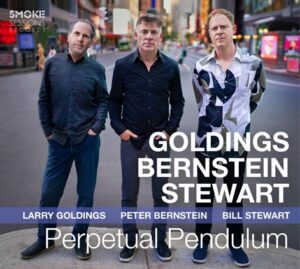 Perpetual motion has been dismissed as an impossibility by scientists, but perhaps they should check in with organist Larry Goldings, guitarist Peter Bernstein and drummer Bill Stewart. The trio has been creating vigorously swinging music together for more than 30 years and show no signs of slowing down. That’s not quite an eternity – though in jazz terms, it might as well be.

The longevity of the musical hook-up between Goldings, Bernstein and Stewart was the inspiration behind Bernstein’s “Perpetual Pendulum,” one of the scintillating new tunes on Perpetual Pendulum, the trio’s new album together. Due out March 25, 2022 from Smoke Sessions Records, the date combines the bandmates’ originals with fresh takes on jazz classics by what is surely the longest-lasting organ trio in modern jazz.

“Thirty-plus years is definitely a milestone,” Bernstein says. “Especially when you consider it in light of jazz history; it’s trippy to think about, but that’s equivalent to keeping a band together from 1940 to 1970. If you think about how short a time so many of our musical heroes were even active, let alone have a group together – I mean, the classic Coltrane quartet was only together for about four years. So it is pretty significant.”

Perpetual Pendulum was recorded last July at New York’s Sear Sound, a studio with which the trio shares a storied history dating back to their second outing together, 1992’s Light Blue. The session marked the 30th anniversary of the release of their debut, Goldings’ 1991 album The Intimacy of the Blues.

But their history stretches back even earlier. Goldings and Bernstein had met while still in high school, when both attended the Eastman School of Music’s summer jazz program. The guitarist met Stewart two years later when both were enrolled at William Paterson University, and the drummer and organist hooked up for the first time at a New School session. When Goldings and Bernstein established their spot on the weekly Augie’s calendar, they tried a few drummers before clicking with Stewart and establishing a collective voice that’s endured through three extremely busy solo careers and Goldings’ move to the west coast.

“We all really dig each other, and that’s probably the most important thing,” Goldings says in an attempt to explain the trio’s indefinable chemistry. There’s a lot of crossover in what we like to play and listen to, and our individual visions of jazz tend to align. It’s hard to say, because we never really discuss it; we just try to make good records. We came up together.”

The origin of their trio makes the release of Perpetual Pendulum on Smoke Sessions particularly significant. Smoke Jazz & Supper Club, the label’s parent venue, was opened on the former site of Augie’s Jazz Bar, where Goldings, Bernstein and Stewart established their rapport on a regular Thursday night gig beginning in 1989.

“It was a dive,” Goldings remembers. “It was a hole in the wall. Our weekly night there was the reason why I started playing the organ: the kinds of little places where we could get gigs frequently didn’t have pianos. At Augies, we literally passed the basket to get paid… But between there and the Village Gate, we amassed a local fan base. So, it is significant that we’re releasing this album with Smoke. That room is hallowed… grease.”

Perhaps that grease was part of the magic, as it can still be heard in the trio’s gut-level playing on the title track, Perpetual Pendulum – check out the stick-to-the-ribs groove on “Prelude,” Golding’s bluesification of George Gershwin’s Prelude #2. Or the slick venom they bring to Stewart’s self-explanatory political hit piece, “FU Donald.”

Stewart originally recorded the latter tune on his 2018 album Band Menu, with a trio featuring Walter Smith III and Larry Grenadier. He knew it would make a perfect fit with his lifelong collaborators, however. “I don’t think I’ve ever actually written anything specifically for this trio, to be honest,” Stewart admits. “I just know the way Pete and Larry play, so I just bring things in and see what works.”

Bernstein concurs. “I know whatever I write, these guys can play it. Harmonically, Larry will be totally inside whatever I might be hearing, and Bill makes every band sound like a band. I don’t have to worry about writing with these guys in mind. They’ve informed my whole sound, so they’re always a reference point in whatever I write.”

The guitarist contributed two pieces to the album. The trio reprises his “Little Green Men,” which they originally recorded on Light Blue, in a ferociously swinging version. The aforementioned “Perpetual Pendulum” is a new piece, taken at a smoldering lope that prompts slow-burn solos from both the composer and Goldings. The organist’s “Let’s Get Lots” is a tune as witty and playful as the wordplay in its title. Stewart’s second composition is “Lurkers,” a quietly forceful piece highlighted by the avalanching intensity of Goldings’ solo.

Both John Lewis’ “Django” and Wayne Shorter’s “United” have been longtime staples of the trio’s live sets. Originally recorded by Art Blakey’s Jazz Messengers in 1961, “United” is driven by a forceful propulsion that eventually erupts into a taut bout of trading between Stewart and his bandmates. A trademark of the Modern Jazz Quartet, “Django” opens with an elegant solo turn by Bernstein, perhaps keeping the tune’s namesake, Django Reinhardt, in his mind’s eye. Goldings enters with lush, blossoming chords before effortlessly pivoting into a swaggering swing.

Despite the trio’s mutual love of classic standards, “Come Rain or Come Shine” is one perennial that they’d never tackled onstage. An impromptu warm-up led to its welcome inclusion on the album, a bright moment that showcases the old friends’ warm, easy camaraderie. Gary Bartz’s “Libra” is another new addition to the repertoire, ignited by Stewart’s steamroller rhythms and featuring absolutely blistering solos by all three. Duke Ellington’s “Reflections in D” is the polar opposite – airy, elegant and tender, floating on the waves of Stewart’s shimmering brushwork.

If it’s challenging to imagine a band with the kind of longevity that Goldings, Bernstein and Stewart share, it’s even more rare to find one maintaining this brilliant level of musicianship and chemistry. Its value isn’t lost on the trio, as Bernstein concludes.

“I think we all share a pure feeling of gratitude,” he says. “With these cats, I feel pressured to play my best because they’ve heard everything I can do. At the same time, I feel comfortable trying anything with them because I know whatever I do, they’re going to hold it together. We’ve all grown through our individual experiences, but we always come back to this. And it’s only getting better.”

“Perpetual Pendulum” was was produced by Paul Stache and Damon Smith
and recorded live in New York at Sear Sound’s Studio A on a Neve 8038 custom console
at 96KHz/24bit and mixed to ½” analog tape using a Studer mastering deck.
Available in audiophile HD format.