New Concepts through a Trio Format

in his Latest Release Vermillion 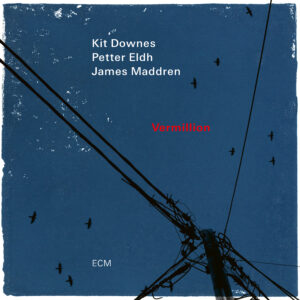 After his widely acclaimed ECM leader-debut Obsidian saw Kit Downes exploring a broad spectrum of organ timbres and the chamber-toned follow-up Dreamlife Of Debris substantially expanded the instrumental pallet, Vermillion now introduces us to Kit’s exceptional pianistic qualities in a trio context with collaborators Petter Eldh on bass and James Maddren on drums.

The Guardian has praised Kit for his “uncanny ability to make difficult music sound natural” and Vermillion provides proof of that, capturing the trio in a carefully assorted piano trio programme that treads gentle lyricism and bold creative outbursts in equal measures and with a strong penchant for melody.

“This record is different from what I’ve done before. We pushed ourselves into an area that we haven’t played in before, which is a more chamber music-oriented sound. The complex rhythmic component is still kept intact, but it’s wrapped in a different aesthetic.” Kit traces his constant search for new musical challenges back to his early mentor, pianist John Taylor, who passed in 2016 and to whom Kit dedicated his first ECM recording: “John sought after real moments in the music, often by doing something unpredictable. He wanted to make new things happen and was obsessed with taking risks musically, which is what I think I did with Obsidian and what we’re doing now on Vermillion.”

No matter whether written and rehearsed at an earlier point or brought to the group on the day of the recording, the trio gives each idea definition and every impulse precise form. “Rather than just documenting everything we’ve done live, with Manfred Eicher’s help we picked what felt like a great collection of music – some music written a couple of years ago, other songs merely two days old. ‘Class Fails’ for example was brought on the day of the recording by Petter. Its bass line may sound like it’s free, but it’s actually in quite specific time. As we started playing the song it turned into what sounds like an organized rubato.”

On Vermillion, construction and deconstruction exist in harmony with each other, creating organic shapes as the two extremes pull at opposite ends and yield gracefully melodious themes in the process. Kit and Petter each came up with five pieces, while the eleventh and final one is an abstract take on Jimi Hendrix’ “Castles Made Of Sand” – the trio joining in a careful unravelling of the song’s individual elements. Vermillion, recorded at the Auditorio Stelio Molo in Lugano in May and June 2021, was produced by Manfred Eicher.

James Maddren and Kit Downes’ musical association goes back to their college days, when the two were flatmates, making music together on a daily basis. James studied with percussionist Martin France at the Royal Academy of Music in London and belongs to the most in-demand percussionists in today’s UK jazz scene – having contributed to recordings and performances by the likes of Norma Winstone, Marc Copland and Gwilym Simcock, on top of being the rhythmic backbone to the majority of Kit’s projects.

Known as the bassist in pianist Django Bates’ Belovèd trio – the trio’s album Study of Touch was released on ECM in 2017 – Petter Eldh’s distinct lower-end contributions can be heard in a variety of contexts since joining Bates’ trio in 2010. Besides his work as an accomplished jazz player, Petter also experiments with electronics, hip-hop and other forms of popular music, which he combines with his jazz background in his Berlin-based group Koma Saxo.

Kit Downes was an organ scholar at St Peter Mancroft in Norwich before going on to study piano, organ and composition at the Purcell School and the Royal Academy of Music. He recorded and toured widely with the band Empirical while also working with – among others Django Bates and Lee Konitz. Besides Petter Eldh and James Maddren, over the years Kit has frequently collaborated with drummer Sebastian Rochford, saxophonist Tom Challenger and cellist Lucy Railton, who all appear on his last ECM outing Dreamlife Of Debris. 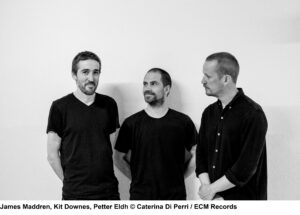