Facing You To Celebrate 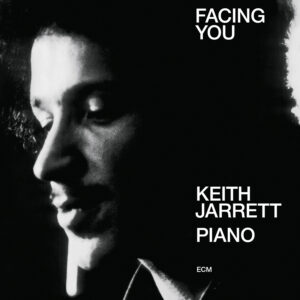 On November 10, 1971 pianist Keith Jarrett entered the Arne Bendiksen studio in Oslo Norway to record his ECM debut, Facing You. This album of solo piano pieces, which now has its 50th anniversary, was produced by Manfred Eicher and engineered by Jan Erik Kongshaug.

Facing You was the auspicious start to a celebrated landmark run of recordings that created a new solo piano paradigm, with albums including: Solo Concerts: Bremen/Lausanne; The Köln Concert; Sun Bear Concerts; The Melody at Night, With You and Jarrett’s latest release, Budapest Concert.

“I was on tour with Miles Davis and had met Manfred around this time,” Jarrett recalled. “He had written me about a proposed collaboration with Chick Corea but I was set on recording solo. I thought it would be a novel idea to not prepare and was totally comfortable with my decision despite a tight afternoon schedule while strictly playing electric piano on the tour.”

Jarrett reminisced about the initial idea of recording solo. “Prior to the recording, Manfred and I went to a classical concert at the university in Heidelberg in which I performed solo. I improvised between a couple of standards and was encouraged by the positive reaction.”

“When he plays alone, Jarrett pushes his creativity to its limits. It’s almost scary to hear someone who apparently relies so totally on the spirited, flowing, almost effusive directions of his muse, yet the muse seems to never let him down. His inspirations seem to be as prolific and varied as his compositions. […] It may well be the finest album of jazz piano solos since Art Tatum left us, and it is without a doubt the most creative and satisfying solo album of the past few years.”  — Rolling Stone (1972)

“Although his most famous solo recording, The Köln Concert, and all subsequent solo recordings, are much better known to the public, for me his first solo recording, Facing You, reigns supreme. Its innovative approach to composition and musical development was shocking at the time. Jarrett radiated as much warmth, heart and beauty in his playing as he did virtuosity and intellect. Jarrett’s playing represents new and innovative levels of harmonic, rhythmic and melodic development bundled with the vastest creativity imaginable. It was a new standard of playing in its time and still is today.” — JazzTimes (2011)