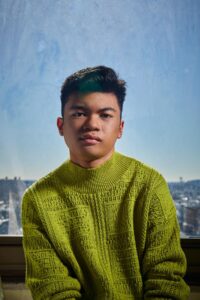 Mack Avenue Music Group is proud to announce the signing of Joey Alexander, whose label debut Origin—his first album of all originals—is slated for a late spring release with vinyl coming early summer.

“I’m honored to be a part of the Mack Avenue family of amazing artists, and grateful to be able to work and collaborate with a team that I know shares my vision and musical spirit,” enthused Alexander. “These past years have been especially trying for everyone, including those of us who didn’t know when we would ever perform for live audiences again.”

The pianist, composer and bandleader is one of the most emotive and compelling pianist-composers active on the scene today, and while his accomplishments to this point are significant—including being the youngest artist ever nominated for a GRAMMY® Award in a jazz category and receiving two additional nominations shortly thereafter, earning profiles in The New York Times and 60 Minutes, and receiving much more critical acclaim—this is truly the epitome of watching an artist come into his own. Alexander, who composed the album’s ten compositions during the pandemic, states: “Origin represents a turning point for me – the time when I decided to turn frustration into an opportunity to truly express myself and to rise above the circumstances.”

Mack Avenue Label Group President Denny Stilwell states: “It’s a good day when an expressive, thoughtful and elegant artist the likes of Joey Alexander joins your roster. He has so much to say – we are looking forward to watching his artistry continue to unfold.”

The effusive pianist is joined on his new release by a stellar coterie of players including Chris Potter (sax), Larry Grenadier (bass), Kendrick Scott (drums) and Gilad Hekselman (guitar), all of whom have joined Alexander on previous records and performances with the exception of Hekselman, joining him here for the first time on three tracks. The album was recorded at Sear Sound, June 23-24, 2021 and mixed at The Mud Room.

Mack Avenue Music Group is excited to embrace and support the unstoppable evolution and creativity from the brilliant mind of Joey Alexander. Over nearly half a dozen releases he has proven to the world that his technique and mastery of the piano is incontrovertible, but now is the time to present his instinctual talent as a composer and leader in the modern sound of jazz.