Due Out October 1, City of Sounds Features 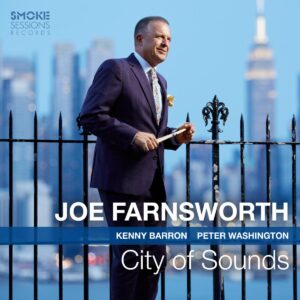 Due out October 1 via Smoke Sessions Records, City of Sounds was captured onstage at Smoke Jazz & Supper Club with a superb trio featuring legendary pianist Kenny Barron and bass titan Peter Washington. The three are reunited from Farnsworth’s Smoke Sessions debut, Time To Swing, which also included Wynton Marsalis in the line-up. Here Farnsworth sticks to the core trio, a format in which he’s thrived throughout his storied career – including collaborations with McCoy Tyner, Cedar Walton, Harold Mabern, Hank Jones, David Hazeltine and ELEW, among many others.

The set gets off to a brisk and swinging start with Barron’s “New York Attitude.” The song was originally recorded on the pianist’s 1996 album of the same name, but it’s an apt kick-off to an exhilarating evening dedicated to the toughness and tenacity of the jazz mecca’s steadfast musical community.

“We’re at Smoke and there’s no one there, there’re baffles between us, and we have masks on – Kenny Barron, who is royalty and could easily have decided just to stay home and not deal with this, is across the stage with a double mask on. But he’s out there. That’s the fortitude of the New York musician. You have to have it to be here because you get smacked around by so many different things, but you just keep showing up.”

The flip side of that attitude is the tenderness and grace that Barron brings to a classic standard like “The Surrey with the Fringe on Top,” buoyed by Washington’s fleet basslines and the airy touch of Farnsworth’s nimble brushwork. “Moonlight in Vermont” is taken at an achingly slow pace, inspired by an encounter that Farnsworth shared with vocalist Betty Carter while playing at the now-defunct Greenwich Village club Sweet Basil in Benny Golson’s band. Album closer “Softly, as in a Morning Sunrise,” meanwhile, takes on an uncharacteristic brightness that represents the dawn after the darkness.

“Kenny suggested that tune,” Farnsworth says. “Everybody was so worried about the future at that point. We were constantly talking about taking things day by day. That’s all you heard during the pandemic, but it’s something you should hear every day. So ‘Softly’ is a reminder that today is a new day.”

Farnsworth’s “City of Sounds” is a woozy blues that hints at an after-hours jam session, while the blistering “No Fills” recounts a formative lesson taught to him by saxophonist George Coleman. “After the set George asked me, ‘Do you want some butter with them rolls?’ I was playing too much. He wanted me to be more like Billy Higgins. If you listen to Hank Mobley’s Straight No Filter, they do a tune called ‘Soft Impressions’ where McCoy Tyner is on fire, but Billy never plays a fill. It’s just straight through the top like George was talking about. For me, that’s really the bible of no fills.”

The continuity of tradition represented by the album is also captured in its cover photo, which was taken in Weehawken, New Jersey at the same spot where saxophonist Benny Golson is depicted on the cover of 1959’s New York Scene. Golson was one of Farnsworth’s earliest employers, and the site is not far from the homes of Thelonious Monk and Barry Harris, which Farnsworth says affected the very atmosphere of the place.

“People ask all the time if it’s still relevant to come to New York anymore,” Farnsworth concludes. “Without a doubt, if you were to spend a year here, you would be a better musician. Why? Charlie Parker’s not here, but you still feel him. Monk’s not here, but you still feel him. Their presence flows through the streets. It flows through the people. It’s the ultimate power source.”

“City of Sounds” was produced by Paul Stache and Damon Smith,

and mastered to ½” analog tape using a Studer mastering deck.

For the Preferred Artist
Information and press materials (including album covers, promotional photos and bios)