Popular Livestream Series “Live From Emmet’s Place,” and Past Experience with GRAMMY Museum

Online Now as Part of COLLECTION:live™ 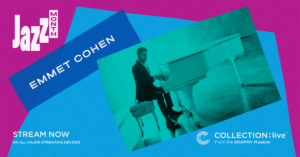 from tradition to create his own future path.” — Glide Magazine

“When Cohen is in full flight…he reminds me of Ahmad Jamal:

not the genteel Jamal you hear on record, but the wall-banging,

holy-shit Jamal I saw in concert a few years ago, who rolled

Mack Avenue Music Group pianist/composer and American Pianists Awards winner Emmet Cohen has partnered with the GRAMMY Museum in their celebration of Jazz Appreciation Month. An exclusive interview with GRAMMY Museum Host Scott Goldman as well as an exclusive performance is available now as part of their COLLECTION:live series and available through their platforms for 30 days.

COLLECTION:live is the GRAMMY Museum’s official online streaming service, featuring an artfully curated collection of newly produced artist interviews, performances and livestreams, as well as special releases from the GRAMMY Museum archive. The Museum’s popular Public Programs series has been recorded over the last decade from the Clive Davis Theater in Los Angeles and has since surpassed the 1,000 program mark. Proceeds benefit the Museum’s music education initiatives.

Cohen will be discussing his new critically acclaimed album Future Stride (released January 29, 2021 via Mack Avenue Records), where he revisits one of the earliest forms of jazz without a trace of quaintness or throwback pastiche by meticulously covering the genre’s lexicon spanning the past century and melding its context with “modern” music. He’s joined here by his longtime rhythm section including bassist Russell Hall and drummer Kyle Poole, as well as two of modern jazz’s most progressive voices in trumpeter Marquis Hill and saxophonist Melissa Aldana, to find the immediacy in a stylistic approach that can speak volumes to modern listeners open to recognizing its thrilling vitality.

The pianist has also proven to be one of the hardest working artists through COVID-19, having completed an international European tour and a recent trip to work in Russia, all while running a weekly livestream series, “Live From Emmet’s Place.” The popular series launched when Cohen and his rhythm section were returning from Canada and decided to quarantine together in his New York apartment. Over time, they began incorporating special guests as they improved audio and video capabilities and found safe ways to invite others in. So far, the series has seen guests including Jazzmeia Horn, Mark Whitfield, Houston Person, Samara Joy, and many others, amassing tens of thousands of views. The stream didn’t stop when Cohen was traveling either — those segments were hosted internationally.

Cohen will also discuss his own previous experience with the GRAMMY Museum’s music education programs and detail how they’ve shaped his future and helped him reach where he is today. Educational opportunities have continued to play a significant role in Cohen’s career, as this new album follows his win at the 2019 American Pianists Awards. He received a cash prize and two years of career advancement and support valued at over $100,000, making this one of the most coveted prizes in the music world and the largest for American jazz pianists. Cohen’s recording contract with Mack Avenue Music Group was a part of the prize from the American Pianists Association as well. 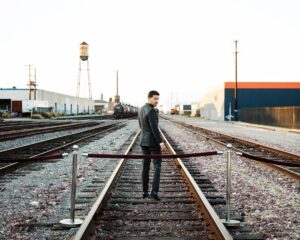