on their Third album Lasting 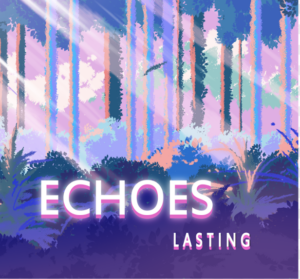 Set for an October 15 release, Lasting is the third album by the up-and-coming group of young jazz musicians Echoes. Reedist Max Bessesen, percussionist Matt DiBiase, Drummer Chase Kuesel, and bassist Evan Levine make up the leaderless collective, whose sound blends futuristic electronica with jazz improvisation, while dabbing with electronic instruments, loops, and triggers for an additional layer of intricacy. Members show off their personal styles throughout, with each composing two of the tracks that make up the album.

The album opens with “Jam Fest,” as an opening drum groove leads to an anthemic, and occasionally wry, melody. “This is a tongue-in-cheek piece for a good time,” says Bessesen, who penned the composition. The gravelly saxophone sound carries on throughout the track, complimented by smooth melodic flourishes in the vibraphone. The track boldly introduces the listener to the electronica fusion that follows on the record.

Immediately welcomed by a synth keyboard, “Taylor” integrates the band’s diverse interests into the formal structure of the song. The composition works around an adaptation of a beatboxing performance by Taylor McFerrin, which Kuesel adeptly translates to the drum kit. The band uses a sample from Taylor’s performance to cue different sections in real time, leading to an exciting, unpredictable listening experience.

The sequence of “Off Switch” and “Flipbook” that follows provides a representative example of the diverse emotional landscapes the band is able to convey with their compositions. In response to his composition “Off Switch,” DiBiase says, “At first the bass solo is content, but it gradually grows into glitchy darkness and requires a reset of the intro piano motif.” After being brought to this glitchy darkness, “Flipbook” brings back a sense of joy, as DiBiase describes the piece as “syncopated and playful,” with a melody meant to “paint the story of an animated cartoon character.”

Evan Levine titled the track “Asbury” after his hometown of Asbury Park, NJ. “This tune takes a lot of the group’s rock influences and uses layers to create a powerful groove with a sweet, relaxed melody skating over the top of it. Think about drinking a beer on the beach – it’s hot outside, but the water is cold,” says Levine. This track has an easy- going feel as it builds itself a story through the layers of piano, drums, percussion, with sax fading in and out.

“Wasted” could be thrown into any romantic film and fit perfectly. Bessen tells the story of “Relationships, nights, sobriety… all wasted away and explored in this heartfelt, off-kilter, ballad.” These stories are told through the slow, contemplative movement of the piano and the soft complimenting instrumentals.

“Attics” and “Lasting” are the final two tracks of the band’s third offering. “Attics” returns the band to a grooving, hypnotic soundscape, as Bessesen’s solo takes flight before the song ends with lush arpeggios from DiBiase’s vibraphone. “Lasting” provides a meditative end to the record, as a soaring saxophone melody takes shape over a repeated ostinato in the keyboards. The song ends with a cycle of ethereal suspended chords, meant to “convey a sense of openness – a value that the band hopes to maintain as they move into the future together.” says Kuesel.

Taken as a whole, Lasting finds an ensemble equally interested in joyful interplay and melancholic reflection. It is a strong and compelling effort, and an important document from an ensemble that is poised to refine its unique voice on the international stage for years to come. 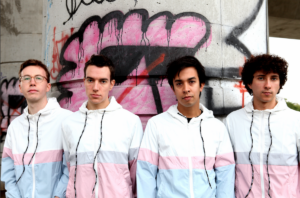 Chase Kuesel is a composer and drummer based in Brooklyn, New York. Hailed as an “ambitious” composer by All About Jazz, his debut album as a leader, “Space Between,” was released on Ears & Eyes Records in July 2020. In 2021, he was announced as a recipient of ASCAP’s Young Jazz Composers Award for his song “The World Is Now Your Own,” composed in honor of the birth of pianist Glenn Zaleski and violinist Tomoko Omura’s child. In July 2020, he was awarded a “Pathways to Jazz Grant” by the Boulder County Arts Association to record a new album, which will be released in Spring 2022. In addition to his own music, Chase is actively involved in many projects as a sideman. He has shared the stage with Emma Frank, Morgan Guerin, and Allegra Krieger, and performs regularly with the Alex Hamburger Quartet and the collective ensemble Echoes. Cross-disciplinary explorations have inspired Chase’s latest work. In summer 2020, he published both an animated music video, in collaboration with artist Ian Kelly, and an essay in Music & Literature that explores the relationship between music production and digital culture. He appears on drums and composed the second track, “Taylor,” as well as the closing track to the album, “Lasting.”

A southern California based multimedia artist, Matt DiBiase (aka Plexusplay) began his passion for music in Boston studying classical mallet percussion on marimba from the age of 5. Matt has performed his original music on multiple tours in the U.S. as well as internationally in Europe and the Middle East. Select performances of his own original music include headlining the Idyllwild Jazz in the Pines Festival, opening for KNOWER, Tri-C Jazz Festival (Cleveland), Carson City Jazz Festival, Laguna Beach Festival of the Arts, Jazz at Lincoln Center, the Tsai Center, Boston’s Symphony Hall, and San Diego’s Symphony Hall. Matt has shared the stage with artists such as Genevieve Artadi, Kamau Kenyatta, Gilbert Castellanos, and Joshua White. He appears as the percussionist throughout the album and composed the third and fourth tracks of the album, “Off Switch” and “Flipbook.”

Evan Levine is an electric and double bassist located in Chicago, IL. He is a Filipino American that completed his master’s degree at the University of Michigan and his undergraduate degree at Oberlin Conservatory. Originally from New Jersey, Evan started his professional career at the age of 16. He has performed at jazz clubs such as: Dizzy’s Club Coca Cola, Cliff Bells, The New Jersey Performing Arts Center and has played at the Detroit Jazz Festival in 2014 and 2015. Evan has had the opportunity to perform with Benny Golson, Carl Allen, Nicholas Payton, Dave Liebman, Jamey Haddad and many others. He has released two albums as a leader – Unsolvable Problems and Mestizo (Shifting Paradigm Records, 2018). He appears on bass and composed the tracks “Asbury” and “Attics.”

Max Bessesen is a performer, composer, and educator based in New York City. His skills as a saxophonist and woodwind doubler have taken him across five continents and earned him awards from organizations including Downbeat Magazine and the Frank Huntington Beebe Fund. Max has performed and recorded with artists as diverse as Dayna Stephens, Simone Shaheen, and Isaac Slade (of TheFray). His debut album as a leader, Trouble, was released on Ropeadope Records in 2020. He appears as the reedist and composed both the opening track, “JamFest,” and “Wasted,” found in the second half of the album.