Saxophonist Vincent Herring Battles Back From

Bout with Coronavirus and Career-Threatening

Side Effects with Optimistic New Album, 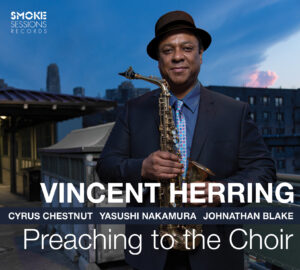 Despite the prevailing darkness, Herring insists on seeing a silver lining in the looming storm clouds overhead. On his latest album, Preaching to the Choir (available now via Smoke Sessions Records), he delivers a sermon of optimism and hope to the jazz faithful, aided by as fervent a congregation as a swing disciple could pray for: pianist Cyrus Chestnut, bassist Yasushi Nakamura, and drummer Johnathan Blake.

Vincent Herring · Preaching to the Choir