for Next Installment of Jazz Is Dead Series 2

Available July 15 via Jazz Is Dead 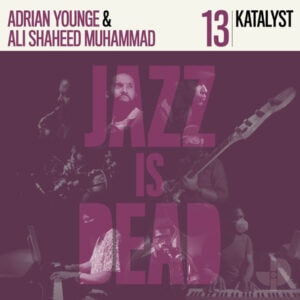 Over the last decade, the Los Angeles-based band Katalyst has carved out a name for themselves as bearers of the community-driven jazz scene, popping up on major releases while remaining an integral incubator for outstretched corners of the emerging sound. The group members have become favorites of Jazz Is Dead, appearing on stage with legends like Ronnie Laws and Lonnie Liston Smith. Bandleader Greg Paul can be heard with Gary Bartz and Roy Ayers on their respective releases with the label. Here, the nascent superstars convene with maestros Adrian Younge and Ali Shaheed Muhammad to document their chameleonic pallet and ever-growing profile as one of the most exciting emerging groups in the genre, all featured here on Katalyst JID013.

“Where they are now is where Earth, Wind & Fire was before they named themselves Earth, Wind & Fire, or even early Headhunters,” reflects Muhammad. “They are of that ilk, and watching those guys to me is the equivalent of watching a young Max Roach or a young Herbie Hancock; but they are not that. They are Katalyst, they are themselves.”

The web of influences that ties Katalyst together immediately leaps from the headphones on tracks like “Reflections” and “Corridors,” which channel the Soulquarian energy of James Poyser and the late Roy Hargrove, as well as Jazz-Funk astral travelers like Lonnie Liston Smith and Norman Connors.

Fluttering in and out of gravity, the drums and keys oscillate between contemplation and exuberance. The album’s first single “Juneteenth” is a triumphant celebratory number, a commemoration of a history that has long been obscured and outright denied, featuring swooping horns and stomping percussion. The track focuses on the holiday which came to be celebrated as the true end to slavery, removing the whitewashing of the Reconstructionist narrative that Lincoln “freed the slaves,” but rather, had failed to free anyone not under his jurisdiction. It is a reminder not only of the inhumane crimes committed by this nation, but of the perseverance to recognize the truth. On the track bearing the same name, Katalyst pays tribute with like-minded urgency, as the percussion marches forward and horns announce the inevitably of justice prevailing.

The group’s second single “Daybreak” is a deceptively languid track. Imagine the soundtrack to this city of quartz that floats you along the 10 freeway, above the crawl, towards a deeper feeling of the concurrent states of bliss and anxiety that coexist in Los Angeles.

“Katalyst is the first time that we recorded a younger group for Jazz Is Dead, and it was very interesting for me to learn from them, to learn how newer cats are thinking in the studio and to find ways I can grow,” shares Younge. “We all grow with all these musicians in watching not only their amazing musicianship but also their sonic bond together. The fact that they know how to control their volume together its like they represent what a band really is and I just feel very fortunate that we were allowed to record new music with these young living legends.”

On “Summer Solstice,” the group channels the distinct smell of ocean breeze. “Dogon Cypher” is taut and precise, while maintaining the group’s spontaneity, the kinetic percussion and supernatural synthesizer reminiscent of fellow contemporary Angeleno jazz innovators the West Coast Get Down. There may be no better introductory track to the group than album opener, “The Avenues,” an inspiring four minutes that captures the ensemble’s wide influences and makes an unimpeachable case for their ascendancy, with flourishes of DJ Premier and Pharoah Sanders.

“They are the babies of hip hop and jazz,” says Muhammad, “and they are having a different conversation, so to be able to sit with them… it’s very different from the other records, and I just love having the opportunity to work with them and mix it up.”

Despite their incredible talent and artistic vision, Katalyst is not here to save jazz. To position the multifaceted group and its multi-talented members as such would be to discredit the tremendous accomplishments and acclaim that they have garnered collaborating on stage and in the studio with some of the world’s biggest stars. Rather than preserve any such outdated notions of what is and isn’t, the collective’s music is a mission to pollinate, and reposition jazz for a new generation while paying respect to the giants whose shoulders they stand on. In which case, Katalyst JID013 is the ideal mission statement, a rallying call for curious listeners, as well as an open invite to anyone new to the party.

Watch the Trailer for Jazz Is Dead Series 2