Bromberg Escapes the Pandemic Blues with a

the Spirit of the Open Road 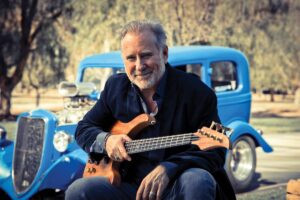 After nearly a year of being cooped up within the same four walls, it’s only natural that one’s thoughts might turn to the freedom of the open road. That’s certainly true of virtuoso jazz bassist and world-renowned producer Brian Bromberg, whose third pandemic-era release shrugs off the prevailing mood of COVID-era claustrophobia and political strife for A Little Driving Music, a fun, funky paean to cruising with the top down and leaving your troubles behind.
While countless musicians have spent the quarantine months in a state of limbo, the always-prolific Bromberg quickly figured out a way to continue making music while remaining socially distanced. Available now via Artistry Music/Mack Avenue Music Group, A Little Driving Music follows the bassist’s wide-ranging holiday album, Celebrate Me Home, and the remixed and remastered digital release of his stunning tribute album Bromberg Plays Hendrix.
“In one aspect it’s been a weird, heartbreaking time to be a musician who just wants to play music with human beings, for human beings,” Bromberg laments. “On the flip side, I’ve been really fortunate. It’s been a really positive, productive period because I’ve had nothing but time to sit in front of a computer or pluck my strings.”
A Little Driving Music features a dozen new Bromberg compositions as well as a surprising ’80s cover song, the joyful Katrina and the Waves hit “Walking on Sunshine.” Despite recording each musician in isolation and at a distance, the bassist managed to (virtually) assemble an elite roster of longtime collaborators and all-star special guests including saxophonists Dave Koz, Everette Harp, Gary Meek, Elan Trotman, Darren Rahn and Marion Meadows; keyboardist Tom Zink; guitarists Jerry Cortez, Nick Colionne and Ray Fuller; drummers Joel Taylor and Tony Moore; vibraphonist Craig Fundiga; and percussionist Lenny Castro. There’s even a string orchestra featuring members of the National Symphony Orchestra of the Dominican Republic, conducted by arranger/producer Corey Allen (again, with COVID safety protocols in place).
“This is the hand you’re dealt, so you make the most of it,” Bromberg says of the unusual circumstances under which the album was recorded. “Everything about how we do things has changed, but when you come to terms with that and accept it for what is, you can enjoy the process. Especially when you’re dealing with a lot of talented people and state-of-the-art technology – it’s amazing what you can do despite not being in a prime situation.”
Brian Bromberg | A Little Driving Music
Artistry Music • Release Date: May 21, 2021
For more information on Brian Bromberg, please visit: BrianBromberg.net
For media inquiries, please contact:
DL Media · 303-522-4724‬
Leah Concialdi · leah@dlmediamusic.com
Don Lucoff · don@dlmediamusic.com
For press materials on Brian Bromberg, Mack Avenue Music Group’s artists or its family of imprints
(including album covers, promotional photos and logos), please visit media.mackavenue.com
MACK AVENUE · the road to great music · mackavenue.com
###