Jazz Dispensary and Vinyl Me, Please Partner to Reissue Bayete’s Worlds Around the Sun on Vinyl for the

First Time Since its 1972 Release

The Reissue, Which Marks the 50th Anniversary of Pianist & Composer Todd Cochran’s Debut,

“Worlds Around the Sun is indeed a masterpiece that sounds every bit as convincing in the 21st century as it did upon release.” — All Music 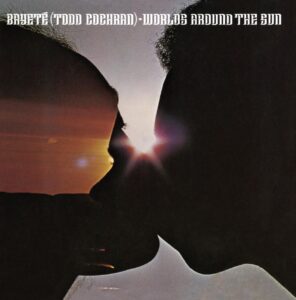 Five decades ago, 20-year-old pianist and composer Todd Cochran, professionally known as Bayeté early in his career, released his solo debut, Worlds Around the Sun. The expansive, textural and boundary-spanning album would go to be one of Cochran’s best-known works and sampled by Kendrick Lamar, De La Soul and others while Santana covered “Free Angela.” Jazz Dispensary, Concord’s cosmic jazz imprint, teamed up with Vinyl Me, Please to reissue Worlds Around the Sun for the time since the album’s initial release in 1972 on Prestige. The vinyl reissue, limited to 1,000 copies, was mastered by Kevin Gray at Cohearent Audio with AAA lacquers cut from the original analog tapes.

“Bayeté is one of those beautiful young brothers who is vibrant and full of energy. He has a hell of a sense of humor. He’s truthful and has a deep communication for other people’s feelings. Constantly aware of music around him, he’s easily able to transmit his thoughts and feelings about what positions he holds in this universe to music. Love, peace, revolutions, personal failures, and triumphs, the oppressor and the oppressed.

“He loves heroes… Constantly moving and on the go, it seems like he’s doing three or four things at the same time… He holds a joy that is as elusive as a rabbit but still as apparent as the very earth he stands on… It’s really a groove to know him, feeling as I do about him-to be able to bullshit as we do on the telephone, or walking and talking – and then to be with him on the same bandstand and have all our questions and thoughts become music.”

The more avenues an artist can draw upon the more original their music will tend to sound. With years devoted to classical music study followed by the tutelage of American jazz masters, pianist and composer Todd Cochran’s music reflects a wide-ranging musical palette. In his art he has continued to build upon this foundation, incorporating diverse musical influences from the traditions of African and Asian diaspora, global pop, and contemporary art music culture. Todd’s happenstance was to grow up in San Francisco during the civil rights era, a transformational time in America’s story. The city was multi-dimensional and the echoes of being a child of the cultural revolution have never left him.

Garnering attention at a young age his associations with legendary jazz musicians began when he was 17, playing and recording with, or composing for John Handy, Bobby Hutcherson, Rashaan Roland Kirk, Woody Shaw, and Julian Priester. And while classical art music was always the foundation of his interest, early in Todd’s career the rock band Santana re-recorded a composition from Todd’s first solo album “Worlds Around The Sun.” This became his entrée into the world of edgy electric underground and alternative music, ultimately leading to the formation of the innovative band Automatic Man.

Says Todd, “This vinyl release of “Worlds Around The Sun” is particularly meaningful, because reflecting back, I can now see the larger shape of the story I was looking to tell. As an artist communication is everything and more than anything, I knew there were frontiers to be explored. There’re solutions to be found by leaving the space you’re in and finding other areas to be discovered. And for me this curiosity is the essence of what really connects us to each other as human beings.”