Smoke Sessions Records proudly announces the July 23 release of The Magic of Now, Orrin Evans’ sixth leader album for the label, and the 20th of the 46-year-old pianist-composer’s luminous career. Recorded in the midst of the upheavals set in motion by the COVID-19 pandemic, this latest recording of Evans’ kaleidoscopic artistic journey coincides with several self-generated sea changes in his life. For one thing, Evans and his wife recently sold their Philadelphia home of 20 years to their oldest son. For another, on March 15th, Evans ended a three-year association with the popular piano trio The Bad Plus to focus on musical projects under his own name.

“People have had to make adjustments and be reborn to a certain extent,” Evans says by way of explaining the title. “We’re past the point where we didn’t know what was going on or what the future would look like. Now we’re settling into what our ‘new normal’ will be, embracing the magic of now and the shape of what will happen next.”

The Magic of Now was recorded at SMOKE during the second weekend of December 2020 by Evans and a multi-generational cohort of A-list partners – first-call New York bassist Vicente Archer; iconic drummer Bill Stewart; and the dynamic 23-year-old alto saxophonist Immanuel Wilkins. They generate an eight-piece program that exemplifies state-of-the-art modern jazz, including three tunes apiece by the leader and Wilkins (whose 2020 Blue Note debut, Omega, was named “Best Debut Jazz Recording of 2020” by NPR Music and number-one jazz recording of 2020 by the New York Times). From the first note to the last, the quartet, convening as a unit for the first time, displays the cohesion and creative confidence of old friends.

Actually, “old friends” is a precise descriptor for the protagonists. “This album is a reunion,” explains Evans, who met Archer when both moved to New York City during the mid-1990s. He began playing frequently with Stewart when saxophone titan Steve Wilson hired both to play in his Wilsonian Grain quartet in 2008. In 2013, he played “big fun” trio gigs with Archer and Stewart at the Litchfield Jazz Festival and the Detroit Jazz Festival and used Stewart on his 2014 Smoke Session album Liberation Blues.

“I knew Immanuel as a performer and a saxophonist, but not as a composer until I played some of his pieces during that series,” Evans says. “I loved the compositions, how he treated them within a set, and how he put everything together. Playing other people’s music inspires me.”

Producer Paul Stache, who’d personally experienced the Evans-Wilkins simpatico during a Wilkins-led livestream at Smoke last August, suggested the matchup. “I’d wanted to do more with Vicente and Bill after 2013, but they ended up playing with Nicholas Payton for a few years and I couldn’t figure out a way to put it back together,” Evans says. “By happenstance, we were all at home during the pandemic.”

“I love Vicente’s fearlessness,” says Evans, himself known for applying a “kamikaze” attitude to jazz expression since he began leading groups in his late teens. “He learns the music and then adds so much to the conversation by playing harmonic and rhythmic ideas you might not have thought of. And I love the way that Bill’s drums sound – his cymbal choices, the way he tunes his bass drum and snare drum.”

As for Wilkins, Evans appreciates his lovely tone throughout the alto’s registral range; his command of a broad swath of jazz lineage; his “ability to bring music to the table and let it breathe, allowing myself, Vicente and Bill to bring something to it totally different than what his band would do.”

On The Magic of Now, the members apply their collective mojo to three heretofore unrecorded Wilkins songs, including the gorgeous ballad “The Poor Fisherman,” of which Evans (a master of the genre) remarks, “I’ve always wanted to write a ballad like that.” The leader notes the “relaxed” quality that Archer and Stewart impart to the 5/4 time signature that underpins the melody-drenched “Levels,” on which composer and leader engage in probing dialogue before each uncorks a commanding solo. Evans also applauds Wilkins’ “Momma Loves,” analogizing it to “a modern-day Monk tune, or modern-day bebop, with extra bars that make it feel weird – everyone plays right on through it.”

The program opens with a medley of Stewart’s anthemic “Mynah” (which debuted on Stewart’s 1997 Blue Note album, Telepathy) and Mulgrew Miller’s “The Eleventh Hour,” a blues that Evans describes as “a melody that, when you get in there, it’s going to start swinging.” That understates what the unit does on this ferociously executed, up-tempo tour de force, on which Wilkins and Evans refract the language of seminal ’60s modernism into their respective argots, propelled by stalwart beat flow from Archer and Stewart.

The first of Evans’ three tunes is “Libra,” a stick-to-the-ribs melody that previously appeared on Evans’ self-released Luvpark and White Boy, You Don’t Know Nothin’ About No Barbecue. “I wanted to hear what Bill would play,” says Evans, whose intensely percussive solo dances to the “distinctive groove” of Stewart, who played regularly with jazz-funk saxophone legend Maceo Parker during the early ’90s.

Evans dedicated the medium-up swinger “MAT-Matt” – which debuted on Evans’ 1999 album Listen To The Band and was reprised on the 2010 date Faith and Action – to his two sons, now 28 and 23. “It speaks to watching them grow,” he says.

The intensity winds down on the set-closing “Dave,” a pensive ballad on which Stewart showcases his skill at flowing in the rubato space. As on the preceding tunes, where he explores numerous dimensions of piano expression, Evans projects his singular voice onto the 88 keys.

“I love the sound of the piano and drums on this record – and I love the sound at Smoke,” Evans says of The Magic of Now. “I love the energy – so close, so intimate. And I appreciate having a long-standing relationship with Paul Stache that’s built on mutual respect. That has a lot to do with how much I enjoy playing music there.” 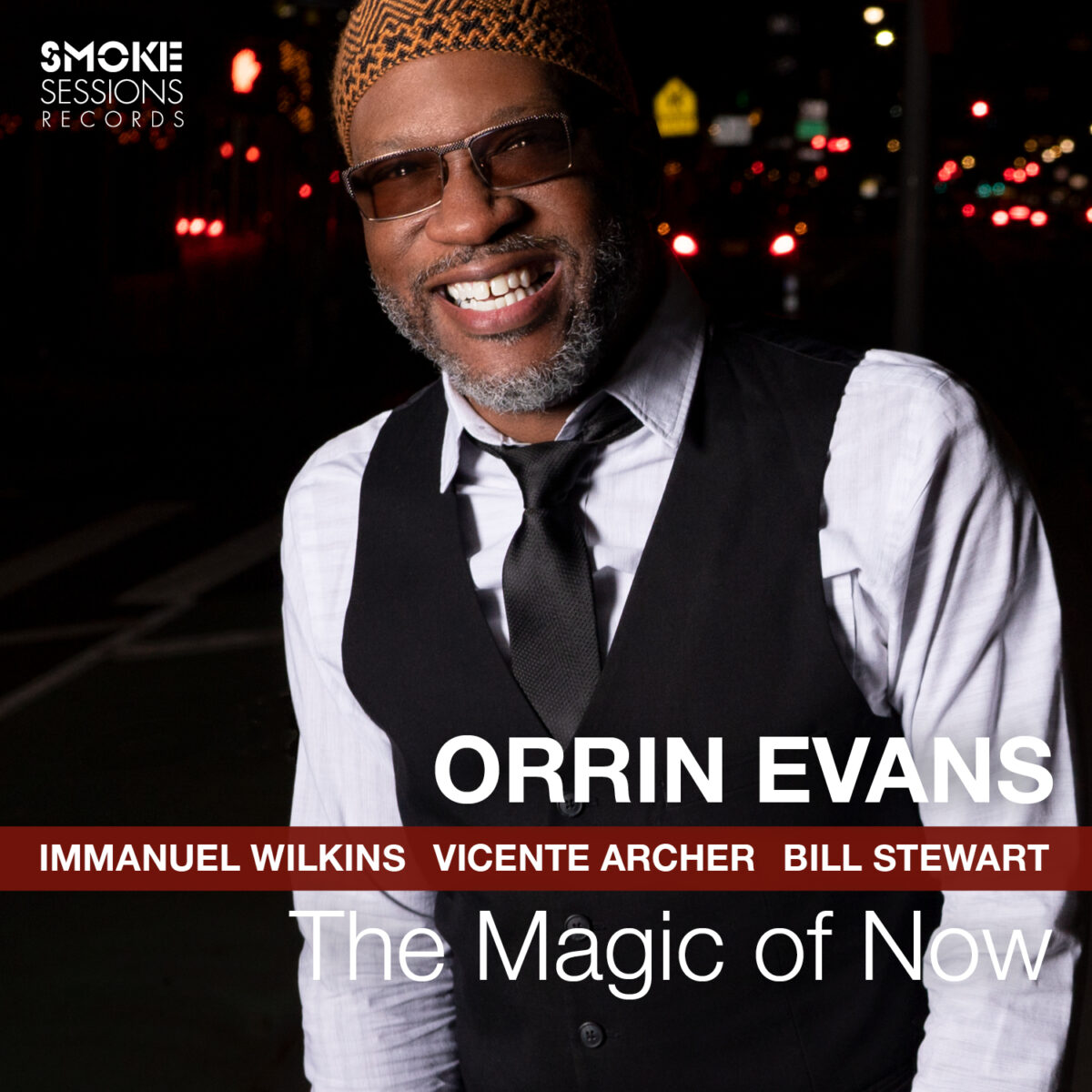 The Magic Of Now