The country as a whole may be bitterly divided over the results of the recent presidential election, but jazz fans of any political stripe can rejoice in the return of the music's own Heads of State. With Four in One, the quartet of living legends - saxophonist Gary Bartz, pianist Larry Willis, drummer Al Foster, and their latest addition, bassist David "Happy" Williams - offer a jubilant, tremendously swinging sophomore release that pairs original compositions by all four members with pieces by some of the icons that have mentored them - in many cases personally. As remembered by Al Foster, "The session had a good feel, everyone was relaxed. We recorded the album in two sets and it felt kind of like a live concert. I think it's mostly first takes if not all."

Heads of State made their debut in 2015 with Search for Peace, recorded just months after they played together for the first time as a quartet at Smoke Jazz & Supper Club in New York City. Now, with another year of playing together under their collective belts (on top of the nearly five decades of relationships shared by the various members), they return with the aptly-titled Four in One, due out March 17 on Smoke Sessions Records.

The title comes from the lesser-known Thelonious Monk composition that opens the album, but it also succinctly captures the strong group spirit and identity that have been forged by an all-star band that was originally meant to be a one-time thing. "We're trying as best as we know how to establish our own identity," Bartz explains, "and not sound like a jam session band."

Given the impeccable taste and wealth of experience of all four members, there was very little chance of a "jam session" sensibility emerging in any case, but in the short time they've been working together the Heads of State have developed a lithe and lively group sound that's equal parts burning and elegant, sharp-edged and gregarious. The band may have begun life as the Larry Willis All-Stars, assembled to pay tribute to the legendary McCoy Tyner (with whom Bartz, Foster and original Heads of State bassist Buster Williams had all played extensively), but very quickly morphed into a collective unit with a far more expansive mission.

"I realized that it would be ridiculous for me to assume any kind of band leadership with these guys," says Willis about relinquishing his marquee status. "They're all icons and legends in their own right, so we decided to co-op."

Foster sets the tone for the album with a taut hi-hat rhythm to open the title track, over which Bartz unspools Monk's typically spiky melody. Willis and Williams soon join to establish a gently simmering tempo, inspiring a blissful reverie from Willis and an assertive bow from Williams, who steps into the bass chair having enjoyed decades of collaboration with his new bandmates along with his renowned tenure in the Cedar Walton Trio.

"I've always enjoyed playing with David," Willis says. "We needed somebody that not only plays good notes but also brings a great attitude and can swing, and David can do all of that."

Monk is just one of the legendary jazz composers whose work is included on Four in One, which casts a wider net for material than the quartet's more Tyner-focused debut (which nonetheless included pieces by John Coltrane, Jackie McLean and Benny Carter). Bartz plays an entrancingly sinuous soprano on Wayne Shorter's ethereal "Dance Cadaverous," while Charlie Parker's "Moose the Mooche" comes in for a particularly brisk, buoyant treatment. John Lewis' "Milestones" provides the opportunity for the group to showcase their knack for finger-snapping swing, while their tenderness shines through on a warm but aching "Someone to Watch Over Me." From there they shift gears into Miles Davis' hard-charging "Sippin' at Bells," highlighted by a heavy-duty barrage of a solo by Foster, and the album concludes with the whipcrack celebration of Eddie Harris' "Freedom Jazz Dance."

Just as notable and memorable as these influential artists' playing on these classics are the original contributions that each make, all of which sit comfortably alongside these pieces by some of the music's greatest composers. Bartz's "And He Called Himself a Messenger" is fueled by an intensely surging pulse, provoking a bold, crashing solo from Willis and a knotty exploration of the sauntering melody by the composer. "Aloysius" adds a rare composer credit for Foster, whose work impressed even Willis, who admits that his friendship with the drummer dates back to a time when "Moby Dick was a sardine." He adds, "As long as we've known each other I had no idea that Al could write on the level that he can."

Willis' own compositional gifts are in full view on the delicate "The Day You Said Goodbye," a Michel Legrand-inspired ballad that the pianists says that he wrote with Tony Bennett's voice in his ears. Indeed, it's not difficult to imagine the legendary singer wringing a bounty of heart-wrenching emotion from the tune - especially since the Heads of State manage to just that without a single lyric being necessary. Finally, Williams' "Keep the Master in Mind" opens with a wistful Willis solo, then slowly accumulates bandmates until the infectiously sunny tune emerges in all its glory.

While the bands' first album was thrilling because it brought together four revered and masterful musicians in one place for the first time ever, Four in One may be even more exciting because it announces their intention to continue to play and evolve together. Given what happens when these four join forces, that's one enticing prospect.

NEWS
REVIEWS
”Throughout his recording career, Allan Harris has often been likened to Nat King Cole…as “Nobody’s Gonna Love You Better” demonstrates, there is much more to Harris’ artistry”, NYC Jazz Record 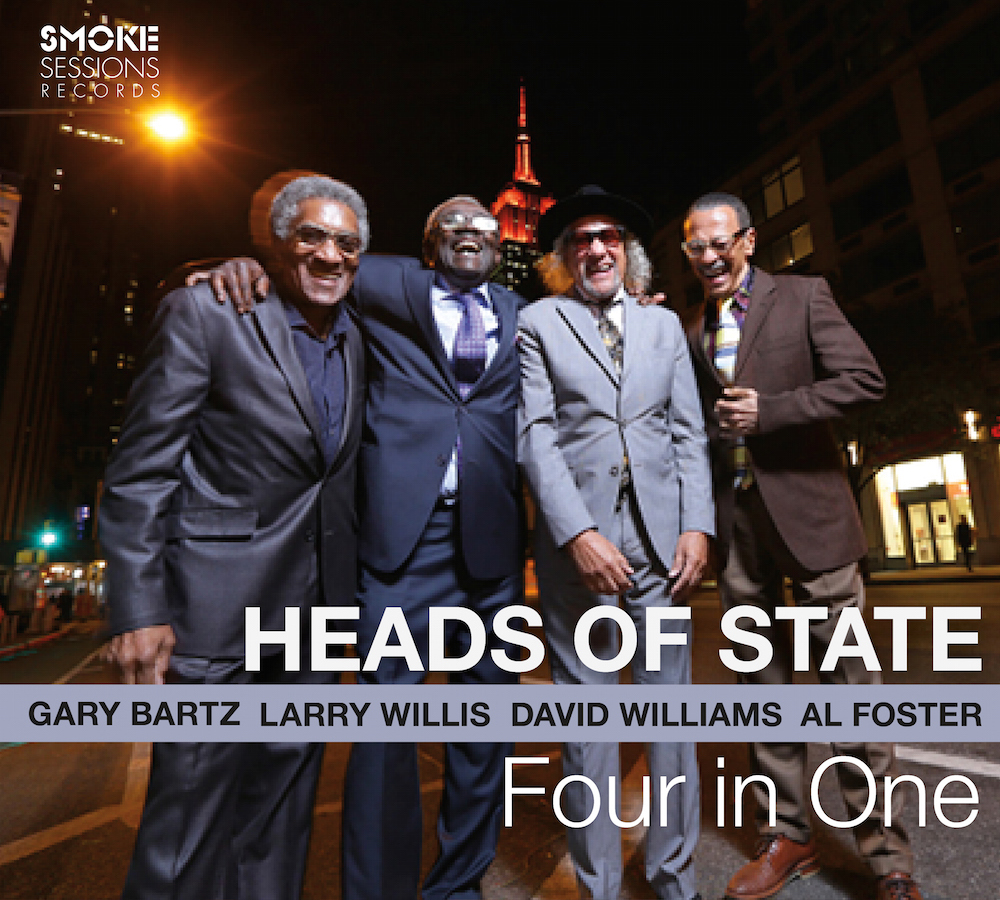