with a Distinctive and Versatile

Sequel “Standards and My Songs”

“Jackson is a master of the seven-string,

which puts him in the ranks

of a select few” — JazzTimes 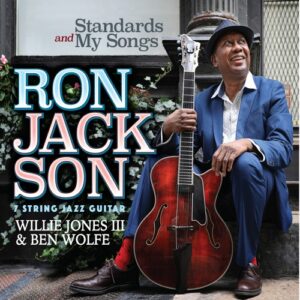 Coming out of the pandemic lockdown, distinctive and versatile jazz guitarist Ron Jackson re-emerges boldly with his latest solo album, Standards and My Songs, released on his own Roni Music label. The album spotlights Jackson’s clean-burning, clean-toned guitar voice mostly in trio format with Willie Jones III and Ben Wolfe (drums and bass, respectively), and serves as a bookend sequel to his pre-pandemic 2019 outing, Standards and Other Songs, with a critical difference.

“It is a sequel,” Jackson states. “On the earlier album, I played standards, some pop songs and even a Drake song that I adapted to jazz. This one is, standards and my songs. I took a couple of hits like soft rock tune ‘Brandy’ and R&B tune ‘Secret Garden’ by Quincy Jones, and adapted them to jazz.”

Song choice is key to the success of the new album’s portrait of Jackson’s broad musical aesthetic, with a program opening with a jazz-flavored arrangement of the 1972 Looking Glass hit “Brandy (You’re a Fine Girl)” (one of two album tracks with cameos by organist Brian Ho) and, to close, a gorgeous solo version of the standard “Time After Time.” The latter showcases Jackson’s unique skill on the 7-string guitar, which the guitarist has been focusing on for a decade and is one of the instrument’s prime jazz proponents. Between those repertoire extremes comes a menu of diverse original tunes, creative new arrangements of Charlie Parker’s “Moose the Mooche”—spiced up with a jazz/hip hop groove–and a 5/4 take on the standard “This Nearly Was Mine,” and more, adapted to and by Jackson’s special touch.

As heard through his warm, unaffected hollow-body guitar sound, Jackson’s seminal influences include Wes Montgomery and George Benson, but he has listened to and studied with a range of other important guitarists on the jazz scene. Two of those lineage points—Bucky Pizzarelli and Pat Martino—passed away in the past two years and are paid tribute to on Jackson’s album. “This Nearly was Mine” nods respectfully to Pizzarelli, who strongly encouraged Jackson to take up the 7-string ten years ago.

Jackson’s radiant ballad “For Pat” pays homage to Martino, and is loosely modeled after Martino’s own ballad “Country Road.” Martino, Jackson comments, “taught me a lot and has obviously influenced some of my lines. There are so many things I learned from Pat, things I continue to work on.”

As for the “My Songs” portion of program, Jackson was careful to sample the diversity of his interests when deciding on originals, from the calypso “Roundabout” (featuring trombonist Clark Gayton)—linking to Jackson’s past work with such St. Thomas-born artists as Ron Blake and Reuben Rogers-–to what he cites as the “Freddie Hubbard-inspired” tune “From Dusk to Dawn.” He leans into a post-bebop energy on his “Walk Fast,” and makes a soulful turn on “She is Love,” co-written with his wife, Michelle Etwaroo.

Looking back at his work, Jackson, whose vast resumé makes him a respected and well-traveled veteran in the jazz universe, asserts “I feel that it’s the best album I’ve done so far. I had to figure out a way to put the music together and there was a lot of pressure. I thought seriously about what tunes I wanted to put on there, a mixture in which half of it was my originals. I am very happy with the end result.”

Jackson points out, “my goal would be to have other guitarists pick up the instrument and for the listener, to be more aware of it.” This effort is shown on an album cover design that boldly states “7 STRING JAZZ GUITAR,” which draws your attention to the low “A” string of the Eastman guitar that he’s holding. 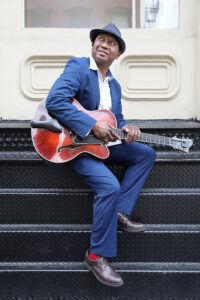 Since the 1991 release of his debut album A Guitar Thing, featuring Benny Green, Cecil Brooks III and Lonnie Plaxico, Jackson has steadily built a robust reputation as a sideman and solo artist, whose new Standards and My Songs is his ninth title as a leader on his independent label Roni Music. Born in 1964 in the Philippines, though mostly raised just outside of Boston, Jackson started out as a rocker, but fell deep into the jazz realm under the influence of such legends as George Benson, Wes Montgomery and Pat Metheny.

After studies at Berklee School of Music, Jackson lived and worked in Paris before moving to New York City and launching his high-profile jazz career, playing on dozens of albums (such as Ron Blake, Hal Singer, T.K. Blue) and working with such artists as Oliver Lake, Dee Dee Bridgewater, Gary Bartz and Randy Weston. His diverse musical life also includes various facets of education—as teacher and published educator–playing on Broadway and other modes of gigging, while carving out his evolving and expanding solo artist persona.

Ron Jackson | Standards and My Songs