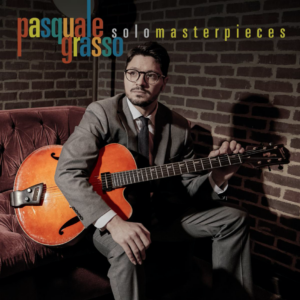 Sony Masterworks is proud to release the latest addition to Pasquale Grasso’s digital showcase series, Solo Masterpieces. The series – which includes the 2019 releases Solo Standards, Vol. 1, Solo Ballads, Vol. 1, Solo Monk and Solo Holiday – all emphasize the guitar virtuoso as he displays his intensive studies of the guitar masters, both bebop and classical. Solo Masterpieces represents the first full length member of the digital series; as a compilation it acts as both a retrospective of the previous albums and also an insight to a handful of previously-unreleased tunes from the upcoming 2020 EP releases. Additional 2020 releases include Grasso exploring the works of Duke Ellington, Bud Powell, and a celebration of the centennial of Charlie Parker.

With Solo Masterpieces, Grasso has gathered music from each of his first solo guitar EPs and melded them. The result is a masterful collection that allows audiences to revel in Grasso’s previous work whilst simultaneously creating an air of excitement for the music yet to be released. The series, which has received critical acclaim thus far, marks a turning point into the new decade and Solo Masterpieces is the encapsulation of the majesty within the music.

Many serious guitar heads have been hip to Grasso for a while now and are aware of his jaw-dropping online performance videos and his early career triumphs. In 2015, he won the Wes Montgomery International Jazz Guitar Competition in New York City, taking home a $5,000 prize and performing with guitar legend Pat Martino’s organ trio. His Sony Masterworks series showcases his sweeping abilities in the most intimate setting possible. “Playing solo guitar is a very intimate experience for me, forcing me to find my own way of improvising on my favorite songs while directly facing the challenges that the guitar presents,” said Grasso.

The series acts as a study in the world of infinite possibilities held within a single instrument. “The key is always to try to find what works on your instrument, which is why studying classical guitar was so influential on how I hear music,” Grasso explains. “When playing classical guitar, it’s like you’re a little orchestra by yourself – you can sound like violin, cello, brass, etc. And technically, it has allowed me to develop original ways of playing my left and right hands independently while also trying to represent the bass and rhythm, with one note leading to the next.”

“The fact is, growing up, other than the great Charlie Christian, I never really listened much to guitarists. It was usually pianists. In particular, when playing solo guitar, my initial inspiration came when I was seven years old, listening to the greats Art Tatum, Bud Powell, and Thelonious Monk. What always amazed me was that although they were playing alone, I felt I could hear the entire band with them.”

Read Profiles on the Series in:

It was the kind of endorsement most rising guitarists can only dream of, and then some. In his interview for Vintage Guitar magazine’s February 2016 cover story, Pat Metheny was asked to name some younger musicians who’d impressed him. “The best guitar player I’ve heard in maybe my entire life is floating around now, Pasquale Grasso,” said the jazz-guitar icon and NEA Jazz Master. “This guy is doing something so amazingly musical and so difficult.

“Mostly what I hear now are guitar players who sound a little bit like me mixed with a little bit of [John Scofield] and a little bit of [Bill Frisell],” he continued. “What’s interesting about Pasquale is that he doesn’t sound anything like that at all. In a way, it is a little bit of a throwback, because his model—which is an incredible model to have—is Bud Powell. He has somehow captured the essence of that language from piano onto guitar in a way that almost nobody has ever addressed. He’s the most significant new guy I’ve heard in many, many years.”

As he’s done with many rising jazz stars, Metheny later invited Grasso over to his New York home to jam and share some wisdom. He’s since become a generous presence in Grasso’s life, and his assessment of Grasso’s playing is—no surprise—spot-on.

Born in Italy and now based in New York City, the 30-year-old guitarist has developed an astounding technique and concept informed not by jazz guitarists so much as by bebop pioneers like Powell, Charlie Parker and Dizzy Gillespie and the classical-guitar tradition. Of his time growing up in Italy, Pasquale said, “I was fortunate to have my brother Luigi to follow. He’s a great saxophonist, and he was so fast to learn anything, while I was super lazy, so it would push me to keep up with him! We would challenge each other, copying the great masters of jazz.”

These days, Grasso maintains a packed gig schedule around New York, dedicating himself to the craft. “Of course, the guitar like an impossible labyrinth – it will always win no matter how much you practice. But even on a bad day, if I’m playing my favorite songs, there’s nothing I’d rather be doing.” His days include performing at Dizzy’s, the Jazz Standard, Birdland, a long-standing Monday night residency at the popular Greenwich Village haunt Mezzrow, and weekly solo performances at the recently re-opened Cafe Bohemia.