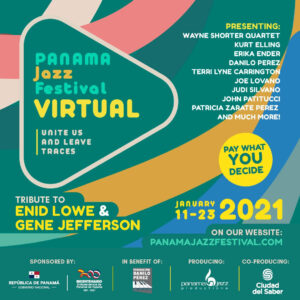 Uniting internationally acclaimed jazz artists, renowned educators, and jazz fans from around the globe, the 18th Panama Jazz Festival will be held January 11-23, 2021 on a virtual platform at www.panamajazzfestival.com.

Among the headliners for this year’s festival are Panamanian pop star Erika Ender in a special duo with jazz pianist and festival Artistic Director Danilo Perez. Panamanian salsa star Rubén Blades will be featured with the Roberto Delgado Salsa Big Band. As a special event, the festival’s gala will feature a virtual concert of the last performance of the Wayne Shorter Quartet and the celebration of their 18-year musical collaboration. Regarding the performance, Perez states, “To perform the last concert of the Wayne Shorter Quartet in Panama was not only unexpected but a true blessing and a gift from the universe. I am grateful to Wayne, Brian, John, and Carolina Shorter for their generous contribution to our social work in Latin America.”

The longstanding festival will celebrate its 18th anniversary and will honor Panamanian singer Enid Lowe and saxophonist Walter “Gene” Jefferson. Enid Lowe, also known as “the Sarah Vaughan of Panama” was born in Colon, Panama in 1935 and from an early age sung in various Panamanian venues with important musicians such as Clarence Martin. Lowe relocated to New York many years ago and remains an active performer in the jazz scene to this day. Gene Jefferson, born in 1931 in Panama City, also relocated to New York City and over the years performed with prominent artists such as Tito Rodriguez, Ray Charles, Arsenio Rodriguez, among others. Lowe and Jefferson who are New York mainstays are part of the Panamanian music community (Mauricio Smith, Frank Anderson, Vitin Paz, among many others).

Furthermore, the festival will host the 9th Latin American Music Therapy Symposium which theme is Music and Community, bringing music therapists from Chile, Argentina, Panama, Colombia, Uruguay, USA, among other countries to present on the therapeutic effects of music; the 5th Symposium of the cultural, artistic and musical expressions of the Afro-descendants of Panama, the VI Conference on Homeschooling, Clinics in different topics related to music, and an array of Panamanian musicians who will be performing virtually.

Participating educational institutions include Boston-based institutions, Berklee College of Music and the New England Conservatory, which will be holding auditions for admission and scholarships, and students will be providing clinics. The Berklee Global Jazz Institute will hold master classes and will host the innovative program where students earn college credit.

Since its inception in 2003, the Panama Jazz Festival has attracted over 350,000 jazz fans worldwide to Panama City, Panama; announced over 4.5 million dollars in national and international scholarships and its educational component brings 5,000 music students from all over the world every year to Panama City, Panama to the most important cultural and educational exchange in Central America.

of the Danilo Pérez Foundation with the help of Panama’s National Government,

Bicentennial of the Independence of Panama from Spain 1821-2021,

For more information on the Panama Jazz Festival, visit: PanamaJazzFestival.com

Public Relations for the Preferred Artist