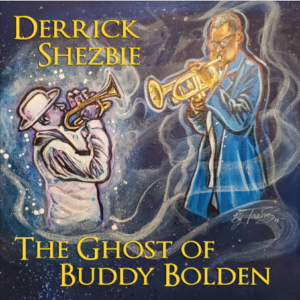 The origin story of jazz has been debated and mythologized. The first jazz players interviewed often attributed their knowledge and sound to one man: Buddy Bolden. New Orleans native musician, Derrick Shezbie, has teamed up with a group of musicians to recreate the circumstances and imitate the sound of the iconic Buddy Bolden. The product of their whirlwind recording experience is the new album, Derrick Shezbie and the Ghost of Buddy Bolden, available from Clubhouse Records on February 28.

As a society, we have been previously limited in the comprehension of what Bolden’s band sounded like. There have been many attempts in the past century to reenact concerts of Bolden’s heyday, yet most often attempts to bring the sound of Buddy Bolden to life have been doomed from a lack of available information regarding that specific period in music history and the lack of information we have regarding the life of Buddy Bolden himself.

GRAMMY® Award-winning trumpeter Derrick (Kabuki) Shezbie partnered with historian Charles Tolman in an effort to capture the spirit of Buddy Bolden and his revolutionary music within Derrick Shezbie and The Ghost of Buddy Bolden. The album is the culmination of heavy research and a reincarnation of the circumstances that Bolden would have created music in. Together, Shezbie and Tolman began the project by assembling a band in the manner similar to that of Bolden and released an album featuring an array of accomplished African American New Orleans musicians.

“It was important for us to get people who grew up playing in New Orleans and knew what is was like to play for a meal. That’s something Buddy and his people would have lived with every day. You don’t play, you don’t eat,” says Shezbie. “Only New Orleans musicians know what it’s like and we wanted to do his legacy proud.”

Tolman and Shezbie studied the performance venues where Bolden played and rehearsed in his footsteps. The band was assembled in one day followed by two days of rehearsals before recording the album in one day at Esplanade Studios in New Orleans.

“We wanted the process to closely mirror the experience that Buddy Bolden would have had in the recording process,” said Tolman. “We literally walked around the city looking for musicians at their hangouts and told them that we had a recording gig in three days. Bolden would have put a band together in this manner and they might have practiced a few times before a gig. It was important for the integrity of the project to keep the structure loose and as close to spontaneous as we could.”

The band for Derrick Shezbie and The Ghost of Buddy Bolden, consists of Louis Ford on clarinet, Carl Leblanc on guitar, Chris Severin on bass, Revert Andrews on trombone and Jerry Anderson (from the Barbarin family) on drums. The structure of the album reflects the tone and feelings of a Buddy Bolden concert from the 18th century. The fastest songs start the album before slowing down the tempo progressively as the album unfolds. Tunes such as “Careless Love,” “Make Me a Pallet,” “Hot Time in the Old Town” and “Ride on King Jesus” are all highlighted in the tribute.

“Ride on King Jesus” was interpreted from choir performances, as the song was originally a gospel number that Bolden adapted into the style of jazz. “We wanted to put this song on there because someone made mention of the fact that Buddy played this song so loud his tuning slide would shoot out of his cornet. After listening to the original piece, we instinctively caught the spirit of the music,” said Shezbie.

It was important for all the members of this band to keep alive the musical traditions of New Orleans.

For more information on Derrick Shezbie and the Ghost of Buddy Bolden, please visit:

Information and press materials (including album covers, promotional photos and bios) on all DL Media artists can be found at our website: dlmediamusic.com