with a Meditative and Existential 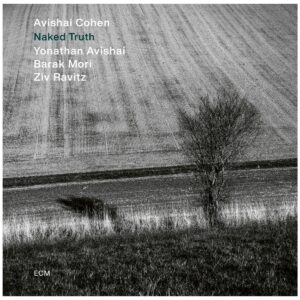 There is a searching, yearning quality to Naked Truth, and a raw beauty and vulnerability in Avishai Cohen’s trumpet sound throughout. Very much music-of-the moment, found and shaped in the course of a remarkable recording session in the South of France, Naked Truth takes the form of an extemporaneous suite. For most of its length the Israeli trumpeter painstakingly leads the way, closely shadowed by his long-time comrades – pianist Yonathan Avishai, bassist Barak Mori and drummer Ziv Ravitz – who share an intuitive understanding, hyper alert to the music’s subtly-changing emphases. At the album’s conclusion, Cohen recites “Departure”, a poem by Zelda Schneurson Mishkovsky, whose themes of renunciation, acceptance and letting go seem optimally-attuned to the mood of the music.

Avishai describes the album as the outcome of a “two-year meditation. I had been sitting with the main motif of Naked Truth since the start of Covid. The eight note motif you hear at the start of Part II was the beginning of the whole process. I wouldn’t say the motif has been ‘haunting’ me exactly, but it’s been accompanying me through this whole period and everything that I came to assemble for the album revolved around those eight notes and all the possibilities within them.

“And as I explored that, a lot of other questions were coming up, as I asked myself what do I want to say in the music, what do I need to say. And the process also came to reflect a personal, emotional journey.” There were two parallel stories unfolding, he elaborates, the search for the compositional framework, and something more existential.

“With earlier albums, like Into The Silence, the music was very much about the compositions. But with this one, the melodies somehow didn’t want to be written down before the recording. And at the same time, the story is definitely not about the solos…”

Cohen had just one rehearsal and one “mini-concert” with Yonathan Avishai and Barak Mori prior to the session at Studios La Buissonne. “The discussion about what to play and what not to play evolved out of that.” As one reference point, Avishai asked his comrades to listen to recordings of bansuri flute master Harisprasad Chaurasia, “who to me conveys so well the ability to play everything and also to play nothing except the essential.” Avishai also discussed trimming percussive details to a minimum with drummer Ziv Ravitz, more than a matter of simply playing less, this was a call to enter the heightened emotional tone and focus of the music (see Part IV here).

With everything stripped back to emphasize the soul-baring spirit of Naked Truth, small instrumental details have a large impact. When Avishai finally switches from crespuscular walking-on-eggshells muted trumpet to open horn playing in Part III, for instance, it is as if a searchlight is suddenly illuminating the music…

“Departure”, a poem by Israeli writer Zelda Schneurson Mishkovsky (1914.1984), is a piece set to music and premiered by Avishai in a project with Danilo Pérez and Chris Potter and subsequently explored further in other Cohen group contexts. “When I first read that poem I was blown away by it.” With its reflections on mortality and its almost Buddhistic balancing (Zelda was Orthodox Jewish) of non-attachment and gratitude and wonder it makes an apt conclusion for Naked Truth. In the present realization, a logical ending, musically, too.

Naked Truth was recorded at Studios La Buissonne in Pernes-les-Fontaines, in September 2021, and produced by Manfred Eicher. 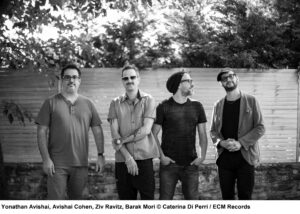