AVAILABLE NOW: “Black and Blue” feat. Common from The Wonderful World of Louis Armstrong’s “A Gift to Pops” | Verve Records

The Wonderful World of Louis Armstrong All Stars

Set to Release A Gift to Pops:

“My school of thought is black openness/

To define and redefine what the culture is.”

and Jackie Harris with Liner Notes from George Wein

Check Out the Exclusive Premiere of 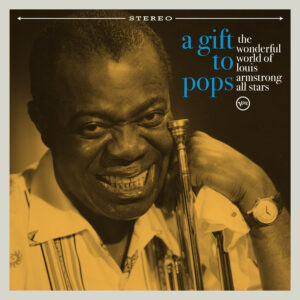 While New Orleans native Louis Armstrong passed away in 1971 at the age of 69, today his legacy as the kingpin of jazz continues to grow. The most significant example of this is the ensemble The Wonderful World of Louis Armstrong All Stars, comprised largely of top-of-the-line Crescent City musicians paying tribute to him with the brilliant album A Gift to Pops. The inventive re-envisioning of music associated with the trumpeter/vocalist during his five-decade career features new arrangements and new performances of stalwart tunes ranging from the “The Peanut Vendor” (recorded by him in 1930) to “What a Wonderful World” (recorded in 1968 and the most successful tune of his career). Special guests include Wynton Marsalis and Common.

Nicholas Payton—who arranged seven of the songs, plays emotive and thrilling trumpet with engaging solos throughout—takes the lead vocals on his modern arrangement of Fats Waller’s “Black and Blue”(available now), a tune about racial consciousness and prejudice that starts out wild and frantic before the bass and drums take it into an R&B-flavored groove. In the midst of the tune, Common delivers his rap poetry on the theme that includes lines such as, “Went through black and blue for the bright day,” and “My school of thought is black openness/To define and redefine what the culture is.”

Co-producer Wycliffe Gordon comments: “Common added a different spin to the tune. It seemed like things we had talked about as a country had changed, but they didn’t, which is why this is important.” Harris adds: “We’re hoping Common will draw young people into Louis Armstrong. We’re out to make changes.”

“We decided to make a recording that captures the essence of Pops,” says Gordon, who is well-versed in the music but is the only member of the band not born in New Orleans. “We wanted to perform the music the way he might have played it if he were still alive. We all had ideas for how to pull this off, by including songs influenced by gospel, the blues, the traditional brass band sounds, popular music and rap.”

In the liner notes, impresario George Wein wrote: “With this recording, this music of Louis Armstrong demonstrates how he created the language of jazz and influenced all the music that followed—from swing to bebop and even to rap, as demonstrated by Common. But there’s one thing for sure: This band and record demonstrate that there was nothing common about Louis Armstrong.”

The project emanated in 2018 by the Louis Armstrong Educational Foundation through the recommendation of Jackie Harris, executive director of LAEF, to celebrate the 50th anniversary of the New York organization founded in 1969 by Louis and his wife Lucille “to give back to the world some of the goodness he received.” Harris says the recording was a team effort started by the Foundation and the wonderful musicians who appear on this recording.

“We wanted to make this recording of the major 20th century artist who instructs and intersects with artists of the 21st century,” says Harris. “All the musicians we asked to participate, even Wynton and Common, were honored to be a part of this. We allowed all the musicians to put their own signatures on the songs.”

Harris notes that the 50th anniversary is a tad late, but other factors interceded, including the difficulty of recording during the pandemic and some artists living in different cities around the country and contributing in different studios.

About the Louis Armstrong Educational Foundation:

Founded by Louis and Lucille Armstrong in 1969, the Louis Armstrong Educational Foundation funds organizations that support jazz musicians, educators, and students. Mr. Armstrong, iconic trumpeter and singer, is the foundation of jazz and of American musical virtuosity in the 20th Century. His earliest recordings taught musicians how to improvise and sing jazz, blues, the American Popular Song and all styles of American vernacular music. His discoveries gave listeners around the world a new way to experience music, and his way of “being natural” in public created another understanding of what it meant to be human. Pops, his nickname which was also the name he called everyone, was a man of the people and all walks of life were given a seat of welcome at his and Lucille’s table. In addition to his legendary artistry, he established this foundation to ensure that future generations would be taught to play and appreciate the art of jazz.

From 1943 to the end of his life, Mr. Armstrong was a resident of Corona, Queens, where he enjoyed traveling across the New York boroughs performing and listening to music.