of Music and Life with Debut Label Release

Vessels of Wood and Earth, Due April 23, 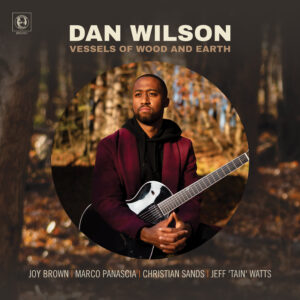 That structural integrity was front of mind when Wilson set out to craft his label debut for bassist/composer Christian McBride’s new imprint Brother Mister Productions — the label’s second release. “In 2014, I was Artist-in-Residence at the Tri-C Jazz Festival in Cleveland, Ohio,” reflects McBride. “I was involved in numerous performances and outreach events over the course of maybe four days. Terri Pontremoli, director of the festival, has been one of my closest confidants and collaborators over the course of 20-plus years. One thing she had never done during the course of our friendship was the old, ‘I got someone you need to hear’ bit. For that reason, when she did it that year, I was quite surprised. The person she wanted me to hear was guitarist Dan Wilson. When I got to Mahall’s that night and heard him playing solo guitar, I was quite impressed. He was coming straight from that Montgomery/Benson/Burrell/Martino bag that Terri knew I would like. After it was over, I knew that I’d just met someone I should have met a long time before. Dan Wilson is an absolute monster! He has an enviable technique that comes so seemingly easy to him and his pocket is very deep. Now it’s my honor to introduce you to him as a Brother Mister artist. In the words of Terri, ‘I got someone you need to hear.’”

“My parents loved Motown,” states Wilson. “My father only played at church, never at home, but my mother’s influence on me was amplified by her knowledge of standards and incredible memory for recalling lyrics and God-given natural talents as a singer.” Wilson’s parents exposed him to the great singers like Dinah Washington, Gloria Lynn, Sarah Vaughan, and Ella Fitzgerald, which he credits for his arioso approach to solos.

“He’s the same as a producer as he is as a person – what you see is what you get,” laughs Wilson. “Christian understands what it means to be both a bandleader and sideman, so he’s got that unique musical perspective. I’m grateful to experience both the shock and the honor of being on Christian’s label.”

Growing up in Akron, Ohio, Dan Wilson spent the majority of his youth within the church community, where his musical path began. Traces of his major guitar influences – including Wes Montgomery, Charlie Christian, Joe Pass, and George Benson to name a few – can be discerned through his playing, but his musical identity has been shaped by everything from gospel and blues to traditional jazz, hip-hop and horn players like Sonny Rollins and Joe Henderson. After graduating from Hiram College, Wilson made his recording debut with pianist Joe McBride and performed to worldwide acclaim with Joey DeFrancesco and Christian McBride’s Tip City, eventually recording his debut as a leader To Whom It May Concern. Wilson has had the honor of sharing the stage with jazz greats including Eric Marienthal, Russell Malone, Les McCann, René Marie, Jeff Hamilton, David Sanborn, and Dave Stryker. He also teaches jazz guitar and music theory through private lessons.

For press materials on Dan Wilson, Mack Avenue Music Group’s artists or its family of imprints