BIO
SHOWS
NEWS
REVIEWS
BIO
Six-time GRAMMY® Award-winning composer, arranger and conductor Vince Mendoza was at Temple University and the Kimmel Center for the Performing Arts this past March as part of a week-long residency with students at the Boyer College of Music and Dance. This culminated with the world premiere and recording of Constant Renaissance, available August 2 on the College's own label, BCM&D Records, which has produced 30 recordings and garnered three GRAMMY® nominations.
Constant Renaissance is a new work featuring trumpeter Terell Stafford, alto-saxophonist Dick Oatts and the Temple University Studio Orchestra. Mendoza wrote the piece with Stafford and Oatts in mind, both of whom are on the jazz faculty at the university. Mendoza was inspired by Philadelphia’s history with jazz and its connection to innovation, reinvention and rebirth. “You might say that the city is in a ‘constant renaissance,’” Mendoza states, "and although some might say that jazz was the “other” sound of Philadelphia, in reality, many of the important innovations in jazz were born in the clubs and streets of this city after World War I, riffing and morphing, and eventually cross pollinating with the work of other artists in Philly."
The composer chose three jazz luminaries who all hailed from the City of Brotherly Love – Dizzy Gillespie, Billie Holiday and John Coltrane. The first movement of the piece, “Bebop Elation,” through its rhythmic bounce and acrobatic melodic nature, evokes Gillespie’s impact on Philadelphia’s progressive music scene and integrated audiences in the early 1940’s. The city named him "Dizzy," and the name stuck -- and there was no other Dizzy Gillespie. John Birks Gillespie arrived in Philadelphia in 1935 at the age of 18. Even then he was a pioneer, with his trumpet playing reaching for the stars and Philadelphia embraced him. In November 1942, Dizzy Gillespie secured an extended engagement at the venerable Philly jazz spot, The Downbeat on Ludlow Street, most known for its embrace of progressive music and its racially integrated audiences. It was a key location in the history of jazz in the city. It was there that Dizzy honed his already original musical ideas and set the stage for his later encounters in New York City that cemented Bebop as the new music for the next generation.
The second movement, “Solace and Inspiration,” is dedicated to Billie Holiday, whose voice, according to Mendoza, “was a source of solace and inspiration." Mendoza continues, "there is indeed something transcendent and mysterious about the voice of Billie. Her sound was about beauty, but also pain, love and longing. Her phrasing seemed to float in mid-air. She sang her life, but she always kept her inner self in a private space. She was the unmistakable soulful voice of jazz." A Philadelphia native, Holiday often came back to Philly to perform during her short career, most often seen at the ornate Earle Theatre on Market Street.
Saxophonist and composer John Coltrane inspired the third movement, “Love, a Beautiful Force,” which embraces the use of ostinato as a sense of meditation and nod to improvisation. Coltrane lived and worked in Philadelphia from 1943 to 1958, but it was toward the end of that period, after leaving the Miles Davis Quintet in 1956, that Coltrane, struggling with drug addiction, returned to his Strawberry Mansion house to kick his habit, and find his inspiration and spiritual awakening. The compositions and recordings following this period became some of the most defining works in 20th century music and a continued guiding light followed by generations of jazz musicians. "The ostinato motive of this movement is in constant variation from beginning to end. The conclusion of the piece morphs into a more contemporary treatment of the ostinato, in a constant ascension to the heavens, in gratitude for the path Coltrane has cleared for us" Mendoza states.
Temple University’s Boyer College of Music and Dance regularly commissions major composers to write or arrange new pieces for student ensembles. “It’s an invaluable experience for our students to rehearse, perform and record new works,” said Robert T. Stroker, Dean and Vice Provost for the Arts at the university, “having a composer of Vince Mendoza’s reputation and stature on campus for a week gives our music students a unique opportunity to learn from one of the best in the field.”
SHOWS 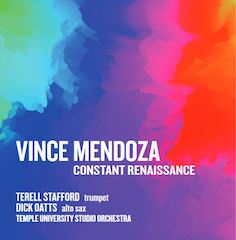