45 years after his album debut, four-time Grammy® Award-winning bassist Stanley Clarke shows he is still unapproachable on both the electric and acoustic, wielding a vision of fusion and funk, breakbeats and bass-interpreted cello suites with a little help from friends like rapper/beatboxer Doug E. Fresh and trumpeter Mark Isham. Backed by a young versatile band and a collection of tunes written in the midst of a tumultuous tour of Europe, The Message (available June 29 via Mack Avenue Records) swells with an abundance of strength, soul and astounding musicianship.

“I’m very excited about our work on this album. I wanted to include some of my band members’ contributions and the result is an album that is funky, melodic, musical, contemporary and fresh with a rich multi-genre influence,” Clarke commented. “The guys in this band are consummate young musicians with musical spirits that are very old.”

In 2015 Clarke brought a band through Europe consisting of keyboardists Cameron Graves and Beka Gochiashvili and drummer Mike Mitchell. When a terrorist attack in Tunisia prevented the band from continuing their tour (which was scheduled to go there next), they opted to hunker down in Paris and compose.

“We were in this great hotel and the owner was a fan,” remembers Clarke. “I said, ‘Can you put these three guys in a room where no one can hear them?’ He found a room and after two days, they wrote compositions that reflected their worldview and included their versatility in many different musical genres. A lot of this stuff I would have never written in a million years.”

A few days later the band entered ICP Studios in Belgium and recorded an abundance of material. Clarke returned to his home in Los Angeles with the tapes and began to tinker. “Once I got the raw material, I fleshed it out. My ability is to orchestrate and arrange. I’m very good with taking anything and turning it into something.”

Much of the material from their Paris adventure is collected on this album but the affair opens with a homegrown homage to several soulful great friends that Clarke has lost in the last few years including George Duke, Al Jarreau, Tom Petty, Leon “Ndugu” Chancler and Prince. Clarke slaps out a funky riff for “And Ya Know We’re Missing You” while renowned beatboxer Doug E. Fresh lays down an intrepid beat. A rare pairing that seems instinctual upon first listen.

“After the Cosmic Rain/Dance of the Planetary Prince” encompasses Clarke’s entire career and is the first on the album from those European sessions. The basis of the tune was written in the early ‘70s for his band Return to Forever, but this time the Planetary Prince is keyboardist Cameron Graves. The young keyboardist, a member of the West Coast Get Down phenomenon, has toured with Clarke for many years. His fleet-fingered tornado is the focal point of the performance. “Cameron played one of the most amazing synthesizer solos I heard in a long time. I had gotten blown out on synthesizer solos from all the fusion days in the ‘70s, but Cameron came up with a warm beautiful solo. One of the best synth solos I’ve heard in 10 or 15 years.”

Amid the barrage of drums and basses on “The Rugged Truth” is Gochiashvili, a native of Tbilisi, Republic of Georgia, who has toured with Clarke for the past five years. His piano solos in this piece hold a breathless array of eclectic ideas and impeccable technique, integrating seamlessly with Graves’ battalion of keys.

Now 21-years-old, Gochiashvili was an award-winning child jazz piano prodigy and has already performed with many of the jazz greats of our time. He was brought to the US in 2008 with the help of Condoleezza Rice, then Secretary of State and an accomplished pianist herself. Rice brought Gochiashvili to New York to participate in auditions at the Juilliard School and at the Manhattan School of Music. Not surprisingly, he was accepted in both schools. He has released two of his own albums, the most recent of which is Beck Logic Project: Chillin’ in Batums.

“Heavy, heavy heavy,” says Clarke with a smile speaking of Gochiashvili. “Beka is a tremendous solo pianist, who I predict one day will be as influential as Keith Jarrett. He is truly a hard worker and dedicated musician. I’m very impressed with him.”

The recognizable voice of Steve Blum narrates “Combat Continuum,” an 8-bit fusion fantasy that steps back beyond the galaxy and into a realm that burns with energy.

In a band full of powerhouses, young Texan drummer Mike Mitchell stands out as an incredible force. “He’s probably one of the most energetic drum geniuses that I have ever played with. I’ve never seen a guy that is so creative with drums. If he continues down this path, he could very easily be a Tony Williams or Elvin Jones,” says Clarke.

The slow groove of “Lost In A World” is a laidback duet between vocalists Skeyler Kole and Trevor Wesley. Tight harmonies and Gochiashvili’s dreamy piano carry the tune on a cloud while “Alternative Facts” burns that same piano to the ground. The band is playful but centered. Gochiashvili shows off his acoustic chops with startling clarity and control.

“The Legend of Abbas and the Sacred Talisman” is a calming meditation from Clarke on upright bass and Gochiashvili’s piano. They dreamily float on the same wavelength, effortlessly drifting along as though they have played together for decades. The warmth and musicianship is undeniable as the ship points the way home to “Enzo’s Theme,” a track from the European session bolstered by the welcome additions of trumpeter Mark Isham and saxophonist Doug Webb.

The Message is unmistakably a Stanley Clarke record. Five decades of unapproachable bass mastery doesn’t come easy and Clarke has no interest in relinquishing his throne. Propelled by the youthfulness of his bandmates, Clarke reaches even deeper into his bag of tricks for an incredibly satisfying listen.

“Our message is simple. It is a message of love. There is nothing really profound about our message. It’s just love. A lot of artists have said it in their own way. This is ours.” 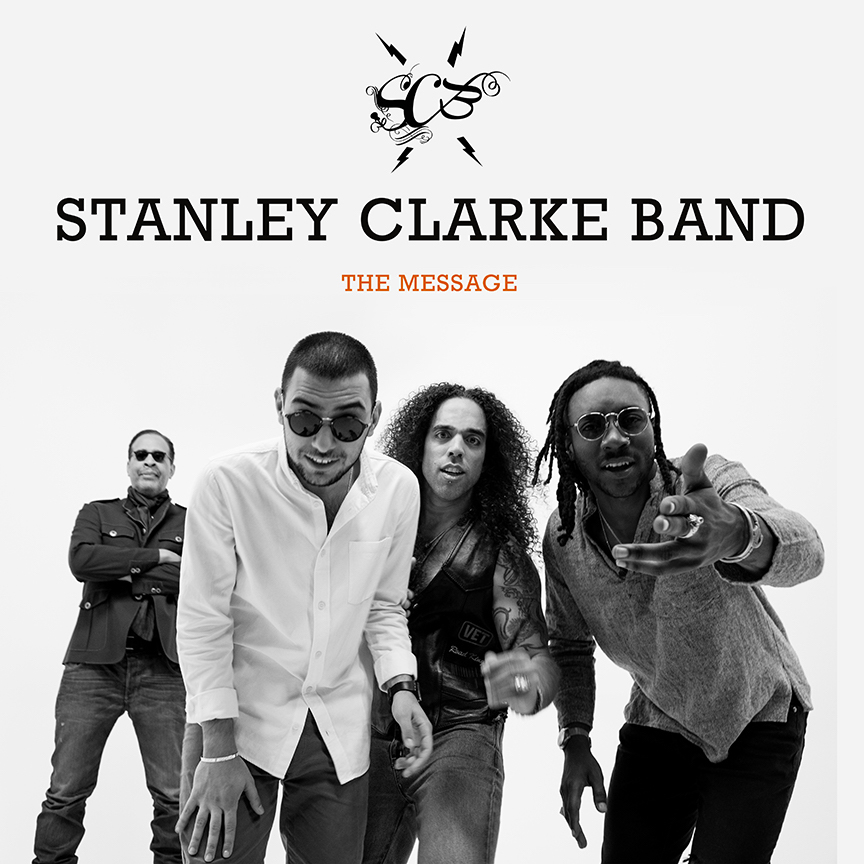