BIO
NEWS
BIO
Deciding to move to a smaller city for a young jazz musician might seem counterintuitive, but in Randy Porter’s case, things worked out just fine. He moved from San Diego to Portland, and any fears of a potentially inadequate jazz scene were quickly dispelled. Porter found a thriving jazz scene in Portland, and one of the most surprising and enjoyable experiences was to hear Dave Frishberg play in jazz clubs around the city. Usually as a sideman but never less than inspiring, Porter heard in Frishberg the lineage of Fats Waller, Bud Powell, Duke Ellington and others that reinforced the importance of song.
Though Frishberg rarely sang publicly at that time in Portland, Frishberg’s innate and well-honed songwriting abilities enabled him to play with a tasteful, quirky swinging balance of elements other jazz pianists couldn’t match. Though this northwest piano relationship clearly started with Porter’s great admiration for Frishberg, it eventually became an artistic mutual respect between the two.
Porter has performed with Freddy Hubbard, Benny Golson, Art Farmer, and Porter’s longtime mentor, Charles McPherson, among others. Years of working with vocalists Nancy King, Gino Vannelli, New York Voices, Rebecca Kilgore, Madeline Eastman, and Diane Schuur have contributed to Porter’s penchant for creating fresh harmonic and rhythmic textures around well-crafted melodies and lyrics. Frishberg’s songs are a wonderful match for Porter’s musical sensibilities.
The natural musical chemistry between Randy Poter, bassist John Wiitala and drummer Todd Strait is clearly evident in every beat. Wiitala is a jazz sage in a way that elevates the band with his intelligence and timing. He can negotiate through and around multiple incoming ideas from piano and drums, distill them all into a fundamental tone placed in the perfect spot, while never being too reactive or complacent. Completing this trio, Strait is certainly one of the most fluent, swinging, supportive, burning-at-all-dynamics, drummers on the planet. Through the years, the trio has developed a great friendship and musical rapport that helps to make Porter Plays Frishberg – Unsung sing.
Before recording began for Unsung, Porter went to Frishberg’s house to let him know about his intentions to record an album of his music. The question arose, “Who’s going to sing?” Though the title of the album addresses that question, in Porter Plays Frishberg – Unsung, Porter and the trio weave through Frishberg’s melodies with a balance of lyricism, inventive harmony, surprising rhythmic styles and a palpable positive collective energy. With the strong underpinning of Frishberg’s music and lyrics, you can feel the message through the melody, the humor through the harmony, and the rhyming in the rhythm.
Unsung can appeal to those who don’t know Frishberg at all; those who might only remember “I’m Just A Bill;” or those Frishberg aficionados who can sing along with “Do You Miss New York?” Porter Plays Frishberg – Unsung includes the witty “I’m Hip” and “Peel Me A Grape,” the insightful and sincere “Listen Here” or “You Are There” as well as those songs that magically seem to combine all the feels like “Dear Departed Past” and “I’m Just A Sideman.”
NEWS 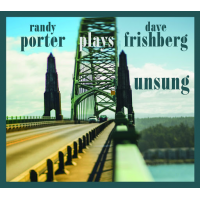