BIO
SHOWS
NEWS
REVIEWS
BIO
At a time when jazz bandleaders from across the musical and generational spectrums regularly lament the difficulty of keeping a band together, it's all the more remarkable that a supergroup like One For All has stuck it out for twenty years. But the impeccably swinging sextet, made up of some of the most in-demand players in modern jazz, is not just celebrating past achievements but charging forward into the future. The title of their latest album, The Third Decade, sounds a confident note marking the dawn of the band's next chapter.
"We're very optimistic," says pianist David Hazeltine. "We're all serious musicians who are dedicated to preserving that swinging feeling, so this band will always be together."
One For All's 16th release is its first in five years and the first in its history to feature original compositions by all six members. The Third Decade, due out June 3 via Smoke Sessions Records, brings together once again tenor saxophonist Eric Alexander, trumpeter Jim Rotondi, trombonist Steve Davis, pianist David Hazeltine, bassist John Webber, and drummer Joe Farnsworth. As always, the fiery and soulful musicianship is only matched by the warmth and spirit that results from a lifetime of musical friendships.
That camaraderie is captured by the band's name, which was taken from the final studio album by Art Blakey's Jazz Messengers; which itself featured a title track penned by Davis. The band was thus founded with a sense of continuity with the past along with the focus on torch-passing renewal that Blakey always expounded.
As Alexander puts it, "It was always our goal to write and arrange music in such a way that we didn't sound like a cover band for Art Blakey or Horace Silver or any of the other classic sextets that have made such indelible marks on modern jazz music. I think we've done a good job of achieving that objective. One For All has brought out aspects of each of our musical personalities that we didn't know we had, or at least that we hadn't explored in a very in-depth way prior to the band's founding."
The release of The Third Decade on the Smoke Sessions label is also a significant homecoming for the sextet, which initially came together on the stage of Smoke's predecessor, Augie's. Smoke has remained an important hub for the band since, as well as being the site for the recording of its 2001 release Live at Smoke.
A single annunciatory snare blast from Farnsworth heralds the opening of The Third Decade with Davis' brisk "Easy," written during a one busy Hartford, Connecticut rush hour. The trombonist muses that the tune just might be "an instinctual therapy to counter life's hectic pace." In any case, it's hard to stress about much with Davis, Rotondi, Alexander and Hazeltine taking such buoyant, worry-relieving solos.
Davis also contributed his piece "Daylight," which had previously been recorded by his own quintet as well as trombonist Steve Turre's Bones of Art sextet. Its bright rhythms feel right at home with this band, though, with the horns and Hazeltine all finding joyous inspiration in Farnsworth's dancing cymbals.
Alexander's yearning "Ghost Ride" was originally written as the title theme for an independent short film. The piece's nocturnal melancholy is bolstered by the addition of French horn played by Alexander's neighbor, Dave Wakefield, whose beautiful sound drifts into the saxophonist's home (and ears) on a daily basis. On the other end of the spectrum is Alexander's tense, urgent "Frenzy," which bristles with a nervous energy that makes its title self-explanatory.
The muscular horn lines of Hazeltine's "Buddy's" celebrate both the friendships in the band as well as the composer's longtime mentor, pianist Buddy Montgomery. "Buddy was one of my heroes growing up and one of the best jazz piano players of all time," Hazeltine says. "I got a chance to know him personally from the time I was 14 until he passed away, so I tried to write something like Buddy would write." It was through his friendship with Montgomery that Hazeltine met drummer "Killer" Ray Appleton, who passed away last October and is the subject of the pianist's second piece, "K-Ray."
Rotondi offers two compositions on the album: "For Curtis," a simmering groove in honor of trombone great Curtis Fuller, and "Ruth," which he previously recorded on a quartet session with One For All's rhythm section, here in a warm, rich new arrangement. Webber's infectiously funky "Babataya" calls to mind the hearty soul-jazz of Lee Morgan, while Farnsworth's "Hey Stevie D" calls out his bandmate with a boisterously grooving, finger-snappin' stroll.
The sole standard on this outing is Hazeltine's arrangement of the Rodgers and Hart classic "It's Easy to Remember," an apt sentiment for the occasion. "Looking back over all the things we've done," Alexander sums up, "it's clear we've been together for a long time, made a lot of music, and have had a tremendous amount of experiences -- musical and otherwise -- together."
SHOWS 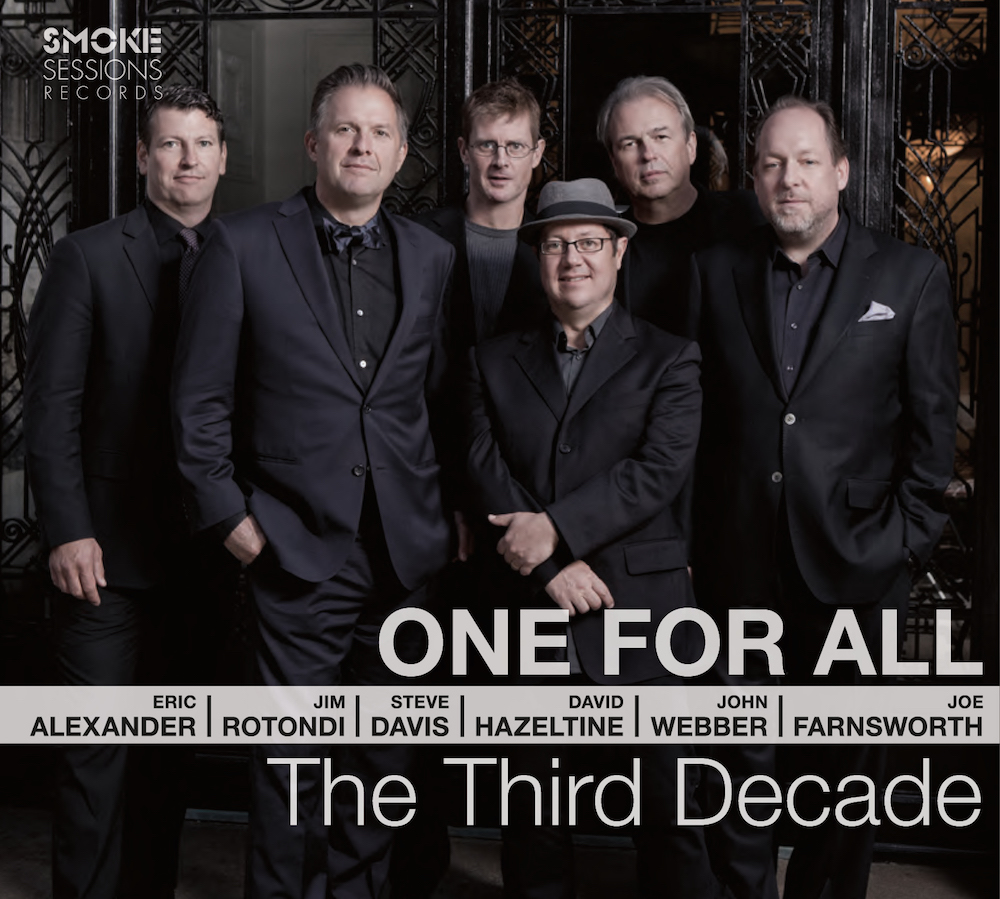