Imagine the ice and snow of the Arctic landscape, the bitter cold of the Northern wind, the hint of compelling blue under a crystallised lake. Close your eyes. Then listen. Really listen. You’ll feel a voice before you even hear it. It’s like none other. It’s a voice that brings the landscape alive with a mesmerising purity; a voice that represents a thousand years of ancestral connection to an unyielding frozen space.

This is Mari Boine.

Musician. Songwriter. Singer. A genre-bending trailblazer with a taste for jazz, folk, rock and world. An artist whose music is inspired by and infused with her Sámi roots. A woman who knows who she is, where she’s come from and what she stands for. A music icon who has inspired indigenous artists the world over.

“It’s completely irrelevant what you call her music. Hers is music that blends seamlessly into the rhythms and sound picture of our times. She could have sung her songs a thousand years ago or a thousand years into the future and still retained the same depth and resonance. In other words, it is like Mari Boine’s voice reveals just the smallest sliver of eternity,” said one critic about her album Gávcci Jahkejuogo (Eight Seasons).

When Mari Boine made her music debut in the early 1980’s, she was an angry young woman. And she had every right to be. Christianity, repression of the Sámi language and the oppressive culture of “the big men down south” – these all weighed heavily on the mind of a girl raised in her native language but discouraged from performing traditional yoik. After all, it was “devil’s work.”

“The first music I ever heard was from my parents, singing hymns. We had no records or television in our home. My strict religious parents never allowed that. We did own a radio, but it was restricted to listening to the news, weather forecasts and Sunday church service,” says Mari. “But of course, when our parents were out or at night, we discovered music from all over the world on those radio channels. In fact, I first heard jazz on that radio.”

Outside the family home, Mari absorbed the music of nature, like the wind “singing” and in spring - birdsong.

Performing first in Norwegian and English, Mari eventually switched to her native tongue Sámi – “a good language to sing in, so rich for the voice,” she said. Mari channelled her personal and political frustration into the 1989 breakthrough album Gula Gula, which propelled her into popular culture both at home and internationally and gave her a platform to advocate for Sámi.

“It’s not that I was always a political activist,” she says. “And I certainly never profess to represent Sámi. It’s just that music gave me a profile and gives me a platform, so I use it. By telling my own personal story as a Sámi, I feel I’m sharing a piece of my people’s story. After all, my songs describe the pain of oppression and the struggle to reclaim self-respect, but I also sing about the joy of growing up within a culture that has such a close bond with nature.”

In 1993, Mari’s album Goaskinviella (Eagle Brother) was awarded the Norwegian equivalent to a Grammy. A decade later, Mari was recognised with the Nordic Council’s Music Prize. This special award acknowledged her artistic achievements, but also her ability to connect with a global audience while still maintaining her integrity as a Sámi.

Mari Boine has a new album. See the Woman. And as to be expected from Mari Boine, this new album is a twist.

“For this project, I really wanted to do something different. So, I reached back into my past, to the kind of music I listened to when I was younger. Much of the music I’ve been making up until now has a shamanistic beat at its core. My new project is full of keyboards and synthesisers and to me, it’s more experimental. These sounds create space for me to tell more complex stories.”

“It’s been a real challenge to see whether my own vocal style (which is heavily influenced bytraditional Sami styles) can work in a language that isn’t my mother tongue. I think I’ve pulled it off. It’s an album I’m very proud of.” 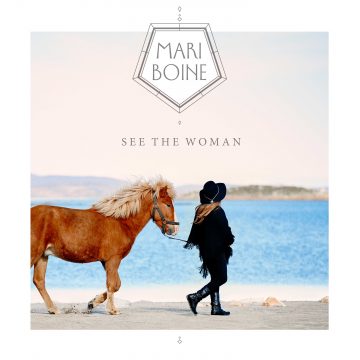