With Gimme5, prolific Brazilian singer-songwriter Manu Lafer offers listeners a joyful slap of the hand, an enthusiastic greeting to audiences around the world as well, perhaps, as a well-earned celebration for two decades of music-making. Over those 20 years Lafer has penned more than 100 songs that have been recorded by some of the most renowned artists in Brazilian music and American jazz – all while maintaining a busy career as a pediatrician.

Lafer has collaborated with such stellar artists as Dori Caymmi, John and Bucky Pizzarelli, Toninho Horta, Chuck Redd, Howard Alden, Maude Maggart, Ná Ozzetti, Ken Peplowski, Warren Vaché, and countless others. On Gimme5, due out October 12, through Megaforce Records, Lafer interprets his own deeply personal songs as only a composer can. “When we sing the songs we wrote, we sing them in a special way because we mean what we sing,” Lafer says. “Each song is a different journey, a different musical landscape.”

For Lafer, those landscapes are painted with the vivid colors of his own unique influences. His songwriting follows in the breezy, sun-dappled tradition of pioneering songwriters like Dorival Caymmi, Antonio Carlos Jobim, Gilberto Gil and Lafer’s major influence, João Gilberto. Like each of them, he has created a unique sound drawn from his own particular blend of styles: a wealth of Brazilian rhythms from bossa nova to baião, melded with early Brazilian innovators from the days of radio, American songbook classics, contemporary jazz, and pop music of the 60s and 70s.

The compositions of Gimme5 are further enriched by the production and arranging gifts of Sandro Albert, Lafer’s partner in the duo Run N’ Fly, who also plays guitar throughout the album. Albert frames Lafer’s tune with influences from Afro-Caribbean music as well as sleek jazz and rock fusion touches. “Sandro is very different from me, and brings things to my music that nobody can,” Lafer says. “He never wants to stay on the same page and do the same thing. That’s what we have in common.”

Lafer’s diverse range of influences can be heard out of the gate on opener “Era Pra Ser,” which combines the lyricism of Caetano Veloso with the compelling groove of Gilberto Gil. The song, which translates as “It’s supposed to be like this,” is the portrait of an idealized romance, the ecstatic thrill of which shines through brilliantly.

“A Jura,” previously recorded by Maude Maggart, is another positive view of love, albeit a more complicated (some might say realistic) one. The song meditates on the way that two people telling each other “I love you” may use the same words but mean entirely different things. While many songwriters may take that as hinting at friction to come, Lafer sees it as a necessary delusion. “The mystery of love is that people love each other for reasons unknown to their partner,” he explains. “Since they say the same thing they stay together, but they never understand what’s really going on. A relationship can be good, even if we never know why.”

“Passos” offers Lafer’s take on the characteristic Brazilian sensation of “saudade” – a unique feeling of nostalgic melancholy that is untranslatable in words but can be felt somewhere deeper through the singer’s moving performance. “Even if you don't understand Portuguese, I think you can guess what the lyrics are saying,” he says.

While Americans rarely use their middle names, Brazilians tend to invest them with more meaning, giving Lafer the premise for the delectably confused love story of “Clara Maria.” The song’s narrator isn’t torn between two women but between the warring personalities of his one love, represented by her two names. “It’s a man who really loves this woman, but he can’t decide which part of her he likes best,” the songwriter laughs. “So he’s suffering -- but in a good way.

The sensual “Amor Primeiro” takes an alluring turn into bolero, drawing inspiration from the songs of Chico Buarque, while “Faz Anos” casts a glance back at Lafer’s own teenage years, when he wrote the song. A young man’s conflicted but starry-eyed view of São Paulo, the tune’s infectious grooves are touched by a hint of Steely Dan cool left over from Run N’ Fly’s more R&B-oriented approach. “Ou Sou Eu” also has personal meaning from Lafer’s past: it was originally recorded by Dori Caymmi for the songwriter’s wedding (and later as a duo on one of Lafer’s earlier albums). It’s a nostalgic view of a bygone Brazil inspired by Lafer’s friendship with the Caymmi musical dynasty.

Another revered Brazilian artist, singer and guitarist Toninho Horta, co-wrote and sings with Cindy Mazelle on the English-language “WWI,” an unusual song inspired by the literary works of William Faulkner and Thomas Wolfe. As those authors looked at the faceless soldiers killed in war and saw their individual humanity, so “WWI” uses the nicknames given to nationalities in the First World War – proper names like Jerry and Sammy standing in for Germans or Americans, respectively – to explore the human beings behind the tragic statistics.

Two other songs are performed in English as well, translations of favorites from lafer’s songbook: “Come,” which provided the slang phrase for the album’s title in its simple come-on; and “Did I Need To Repeat,” a more complicated tale of a father and son and the words – never spoken in the lyrics – that have passed between them.

The playful “Minha Senhora” is Lafer’s twist on a nursery rhyme, empowering a sleepy child to scare off the phantoms that swarm around their bed. The shifting harmonies of “Pra Voce Viajar” echo the intricacy of bossa nova with more gently propulsive Latin rhythms. The album draws to a close with the gleeful “Um Par,” a love song that toys with the titular idea of “a pair.”

Having lived in the U.S. and his native Brazil, and formed deep partnerships with incredible artists in both countries, Lafer is excited to bring his unique blend of the two musical countries to the world via his stellar songwriting. “By saying Gimme5, I wanted to invite people to come close to the music and listen,” he says. “It’s not a problem if they don't understand the lyrics. People naturally gather around music, so I want to help make that happen.” 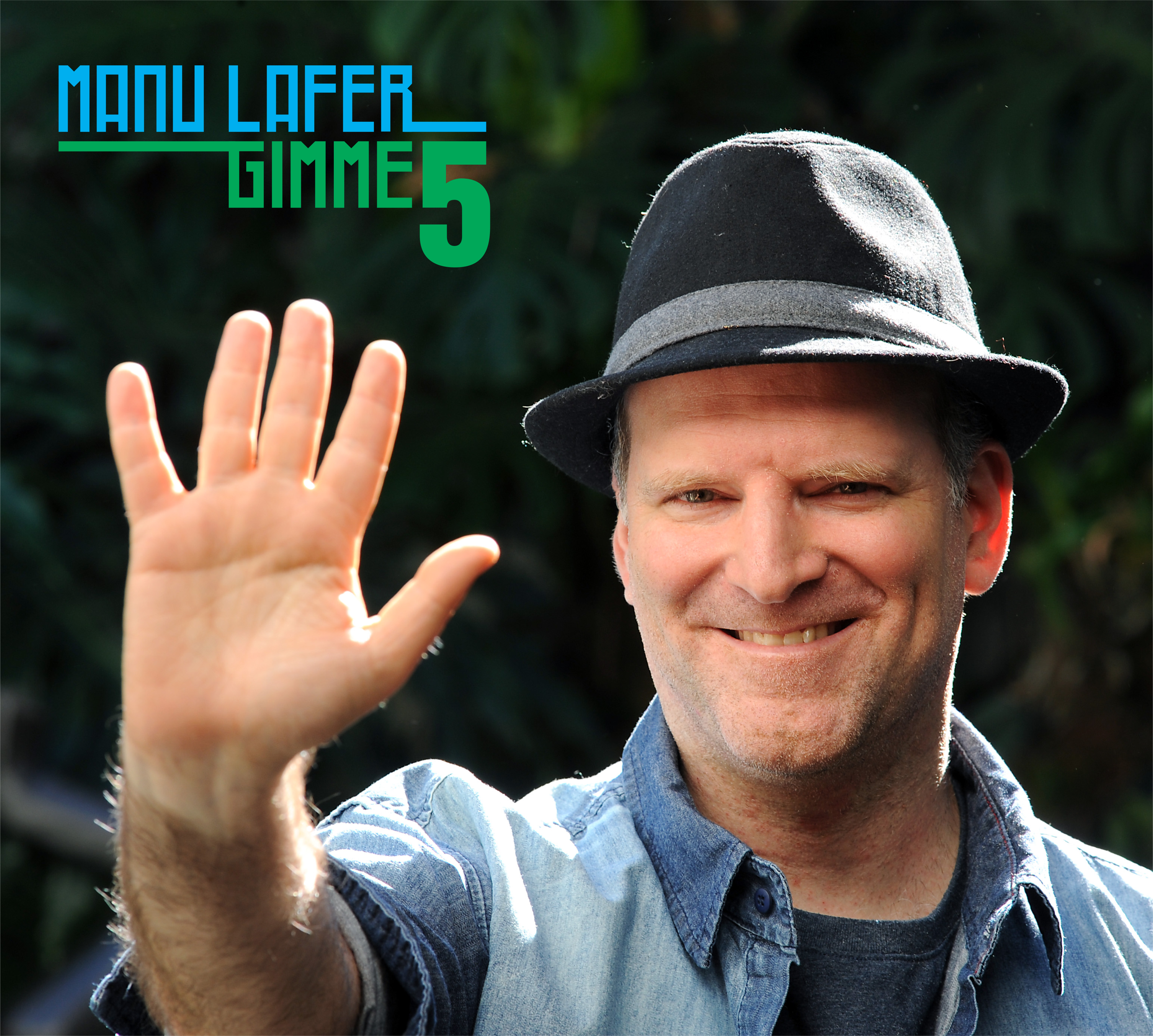