Since his 18-year tenure as guitarist and music director of TV’s The Tonight Show Band ended in 2010, Philadelphia-born guitarist, composer Kevin Eubanks has been on a creative roll. On East West Time Line, Eubanks explores the chemistry he maintains with musicians on both coasts. And once again, his distinctive fingerstyle approach to the instrument is in the service of tunes that run the stylist gamut from urgent swingers to introspective ballads to Latin-tinged numbers and some get-down Philly funk.

Joining Eubanks on this stellar outing are longtime collaborator and former Berklee College of Music schoolmate, drummer Marvin “Smitty” Smith, who fuels the West Coast outfit alongside seasoned session bassist Rene Camacho, percussionist Mino Cinelu and saxophonist Bill Pierce. Smith’s East Coast counterpart on this bi-coastal session is the irrepressibly swinging Jeff “Tain” Watts, a force of nature on the kit who combines with bassist Dave Holland, Philadelphia-based pianist Orrin Evans and New York trumpeter Nicholas Payton for a potent lineup. Together these great musicians bring out the best in Eubanks’ six-string prowess and ignite his searching instincts throughout the sessions in Los Angeles and New York.

“Of course, we all came up through New York,” says the Philly guitarist who broke in with Art Blakey & The Jazz Messengers during the early ‘80s. “But we also got the benefits of seeing the East Coast down and dirty and Hollywood down and dirty too. We combined both vibes on this recording–the kind of Latin vibe of Los Angeles and the straight up swinging vibe of New York.

The album kicks off with “Time Line,” an urgent swinger paced by Holland’s signature walking groove and Watts’ inimitable polyrhythmic burn. Eubanks digs in with fingers on strings in his trademark percussive attack, alternately doubling the baselines and dealing in Wes-style octaves on his solo. Payton also turns in a trumpet solo that bristles with energy and “Tain” is turned loose on the kit at the tag. “There’s something a little Philly about that groove. I mean, it’s a long way from when I was playing in the neighborhood bands but basically that’s a little Philly vibe in there.

Shifting gears, the East Coast crew next settles into the gentle “Water Colors,” which has Payton Payton delivering a beautifully lyrical solo on this melodic track. “This was the first time that I ever played with Nick before,” says Eubanks. “I met him once or twice in passing on the road but we’ve been communicating on Twitter recently And at some point Nick said, ‘Man, one day we gotta hit.’ That’s really how this connection came about. In the studio I told him, ‘If you hear it, man, play it! Just feel free.

The introspective “Poet” introduces Orrin Evans on the Fender Rhodes engaging in a sparse and tender duet with Eubanks on the opening four minutes of the tune before the full band enters. The guitarist shifts from warm-toned electric to nylon string acoustic after that distinct break while Evans moves from Rhodes to acoustic piano in the second half of the tune.

“Carnival” has Eubanks digging in more forcefully on his nylon string acoustic guitar. Holland also delivers a resounding bass solo here while Watts kicks up a fury on the kit and Evans pushes the harmonic envelope on his searching piano solo. “It’s such a pleasure to play with Tain,” says Eubanks. “He just keeps the thing rolling along and keeps the energy at a level where everybody can float on it but at the same time it’s not intrusive on what you want to do.”

The more open-ended “Something About Nothing,” which closes out Side A, has the East Coast ensemble exploring collectively with Evans on Rhodes, Eubanks on electric guitar and Payton turning in another exhilarating trumpet solo. “I think the title really describes the song,” says the guitarist. “We’re dealing with nothing but we’re dealing with something. There’s the bass line, and the chords are circular so you’re free to go wherever you want.

The West Coast crew opens with a mambo-flavored arrangement of Duke Ellington’s “Take The Coltrane.” Eubanks digs in with his typically percussive attack on top of the clave-fueled groove. Eubanks next extrapolates on a motif from Chick Corea’s “Captain Señor Mouse,” which has him doubling on steel string guitar and bass, accompanied only by Mino Cinelu on percussion and Marvin “Smitty” Smith on drums.

The ensemble’s take on Kevin’s uncle, Ray Bryant’s “Cubano Chant” has the guitarist alternating between acoustic and electric while Bill Pierce supplies a soaring soprano sax solo. The guitarist explains his directive to the musicians on this popular Afro-Cuban flavored number. “I just said, ‘Let’s just get compassionate on this…let’s breathe on this and let it float so it’s not all stick it and quit it. The influence of Latin jazz is undeniable when you’re on the West Coast long enough, and I wanted to reflect that in this session.”

Following the familiar soprano sax intro on Marvin Gaye’s “What’s Goin’ On,” the band leaps into a swinging rendition of that ‘60s anthem that has Camacho walking persuasively and Eubanks alternately comping pianistically and soloing with Wes-styled octaves. Smitty’s interactive, swinging pulse fuels this uptempo treatment while Pierce explores the melodic theme before taking off on another flowing soprano sax solo. The idea was to keep it brief, just kind of making a statement of ,’What IS goin’ on?,’ given the current social-political climate. And our version just had an uplifting brightness to it.”

The collection closes with a gorgeous reading of the standard “My One And Only Love,” which features a magnificent solo guitar intro by Eubanks. Pierce’s full-bodied tenor sax voice is decidedly old school here while Camacho maintains a sparse, zen-like approach on bass throughout this relaxed rendition. “I’m definitely thinking about Wes Montgomery when I’m playing this,” says Eubanks, “and it feels so relaxing and beautiful to try and delve into that vibe.

Overall, Eubanks seems exceedingly pleased with the copacetic nature of his first bi-coastal recording. “I think because I’m so familiar with all the musicians and we played together over the years in different settings, on different tours, that it helped the music quite a bit. There’s something that goes with friendship, knowing everybody’s journey to a large extent, that really enhances the communication between the players on a session.

“It’s that thing where everybody’s pulling for each other to do well and trying to make each other sound better, and you keep your sorry-ass ego out of it. We all have egos, we’re human beings and everything, but through the love of the music and wanting the best, good things happen. It’s really such a wonderful kind of democracy that you don’t see in other things. I think jazz music is the most perfect example of democracy in action.”

Philadelphia native Kevin Eubanks grew up surrounded by music. His mother, Vera, was both a gospel and classical pianist, and his brothers Robin and Duane play trombone and trumpet respectively. Eubanks started as an elementary student playing violin, trumpet, and piano and eventually found himself studying at Berklee College of Music. After graduating, he moved to New York City and started performing with legends such Art Blakey, Roy Haynes, and Sam Rivers, carving out a spot as the go-to guitarist in the New York jazz scene. In 1992 he moved to Los Angeles to join the Tonight Show band, and in ‘95 he replaced Branford Marsalis as the leader and served in that role for 15 years. Eubanks left the show in 2010 and has since released three albums with Mack Avenue Records: Zen Food, The Messenger and Duets (with Stanley Jordan). 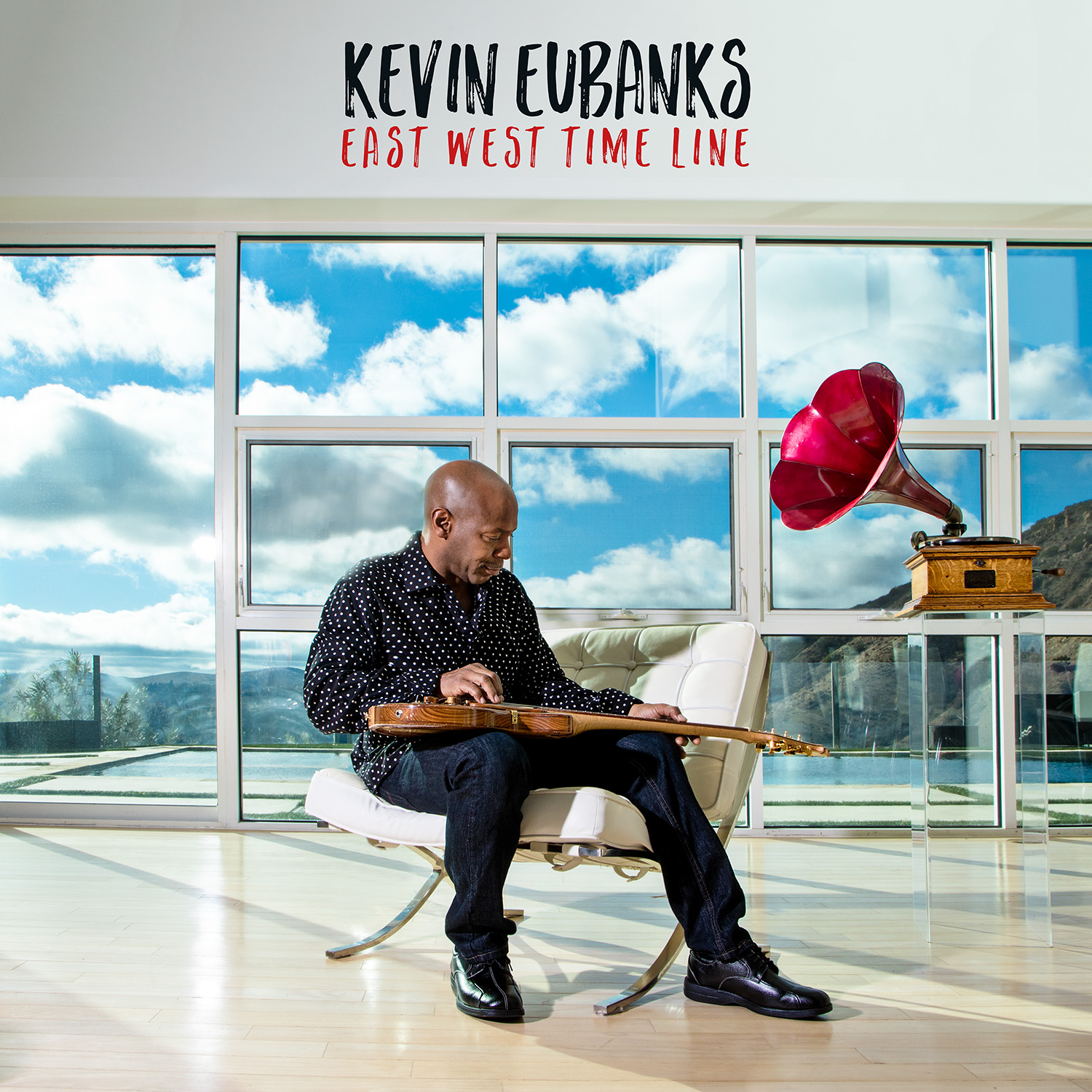