In 2018, Gary Burton celebrated both his 75th birthday and the first full year of his well-deserved (if, for our tastes, way too early) retirement. To celebrate, Mack Avenue Records is taking a look back over the legendary vibraphonist’s storied career with the five-LP collection Take Another Look: A Career Retrospective.

Mack Avenue was honored to be Burton’s final home, releasing two critically acclaimed albums by his remarkable New Quartet featuring guitarist and protégé Julian Lage, bassist Scott Colley, and drummer Antonio Sánchez. But Take Another Look encompasses the entirety of Burton’s 50+-year career, from his attention-grabbing early releases for industry powerhouse RCA Victor, through his wide-ranging sessions for Atlantic and his iconic ECM recordings, on to his fusion-era reinvention on GRP and his eclectic and generation-spanning efforts for Concord and Mack Avenue.

“Recordings are a way of documenting your work and exposing it to a much larger global audience,” Burton says. “And in the end, as this collection demonstrates, it becomes your enduring legacy as well.”

Based on the evidence of these five LPs, Burton’s legacy is an estimable one, a wealth of riches traversing the boundaries of genre, style, nation or generation. It’s nearly impossible to summarize such an adventurous career, but Take Another Look offers a stunning and well-curated overview in 35 tracks over five 180-gram vinyl LPs – including one previously unreleased offering from the New Quartet, a rendition of Pat Metheny’s “Elucidation” from 2005.

As traced in the insightful liner notes by GRAMMY® Award-winning critic Neil Tesser, Burton’s journey began in small-town Indiana, far from the jazz hotspots, where he was drawn to the vibraphone and spent his early years winning talent contests and leading a family band before entering Boston’s Berklee School of Music at the age of 17. By that time, he’d already inked a long-term record contract with RCA Victor and begun working with superstar bandleaders George Shearing and Stan Getz.

Surprisingly for an artist coming from the jazz world, Burton landed at RCA Victor through the auspices of country guitar legend Chet Atkins, then head of the label’s Nashville division. It’s here that Take Another Look picks up the story, opening with a lively sprint through Clifford Brown’s “Joy Spring” from Burton’s 1961 leader debut, New Vibe Man in Town. Atkins’ involvement is more directly manifested in the country-jazz fusion of Bob Wills’ classic “Faded Love” from the Nashville-recorded 1967 album Tennessee Firebird.

The influence of Burton’s classic rock upbringing shines through from the first time in the original incarnation of the Gary Burton Quartet, with Larry Coryell (the first of many guitarists who passed through the vibist’s band en route to making their mark on the instrument), drummer Roy Haynes, and longtime collaborator Steve Swallow on bass. Two tracks from 1967’s Duster include Burton’s first recording of a piece by Carla Bley, which leads into a track from the left-turn follow-up, A Genuine Tong Funeral – the iconoclastic composer’s “Dark Opera Without Words.”

Disc two traces Burton’s transition from the monolithic RCA Victor to the more intimate setting of the Ertegun Brothers’ Atlantic Records. It was during this tenure that Burton won his first GRAMMY® Award, which was also the first statue ever awarded in the “Best Jazz Performance by a Soloist” category, for his audacious 1971 solo debut, Alone At Last (represented here by Jobim’s “Chega de Saudade”). The breadth of Burton’s tastes and talents became vividly apparent through his Atlantic run, which included a co-led session with Keith Jarrett, a meeting with Stéphane Grappelli, the legendary violinist of Django Reinhardt’s Quintette du Hot Club de France, and The New Tango, a 1986 collaboration with genre-defining composer Astor Piazzolla.

Disc three spans Burton’s iconic 16-year run on ECM, which includes the beginning of an unprecedented 45-year partnership with keyboard giant Chick Corea on 1972’s Crystal Silence. It was also during this tenure that Burton discovered the six-string wizardry of Pat Metheny, paired bass innovators Steve Swallow and Eberhard Weber, and helped define the German label’s now instantly identifiable sound. At the end of the ‘80s Burton followed Corea into the fold of Dave Grusin’s GRP Records, where his flirtations with fusion and even smooth jazz can be found on disc four.

Disc five brings the story to a close with Burton’s final decade-and-a-half of recordings for Concord and Mack Avenue, including what the man himself calls “some of my most creatively mature projects… I think my artistic evolution had finally gotten to where I had always been heading.” Here can be found a pair of latter-day duo meetings with Corea as well as “Question and Answer” from the all-star reunion Like Minds, where the pair was joined by Burton alumni Roy Haynes, Pat Metheny, and David Holland. There’s also a beautiful Ravel piece by the vibraphonist and longtime duo partner Makoto Ozone and pieces from his torch-passing ensembles Next Generation and the New Quartet.

“Recordings also document the areas where the artist has broken new ground and influenced the jazz world overall – again, part of one’s legacy,” Burton concludes. “At the time, I was exploring new areas of jazz, and I almost never thought of it this way. Each new thing, whether it was solo vibes, or duets, or playing with four mallets, or mixing in rock and country, just seemed like a good idea at the time. I mostly just thought people might like to hear this.” 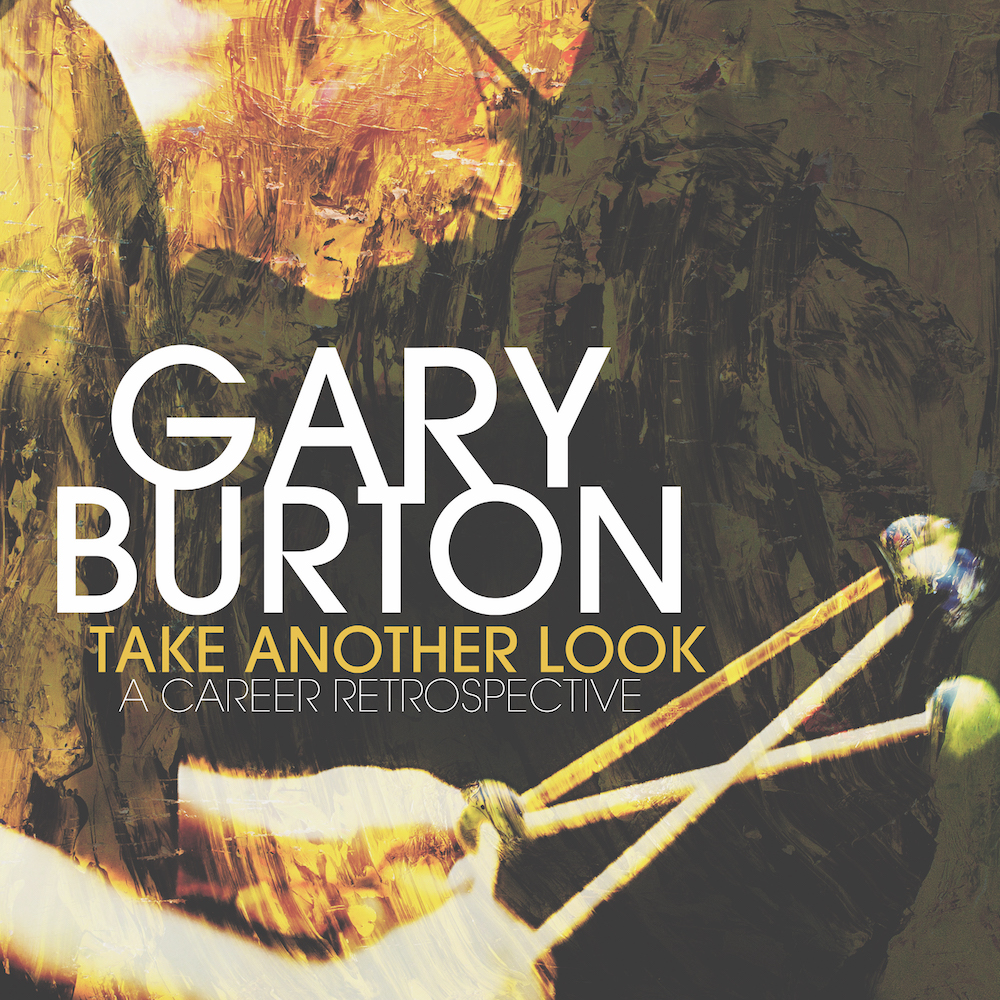 Take Another Look: A career Retrospective