Among nomadic peoples like the gypsies, the oral tradition is central to keeping a heritage alive. Customs, beliefs, stories and, of course, music must be passed down from one generation to the next, always honored but continuously evolved and updated as time marches on. With their new album, Attitude Manouche (available June 15 on Resilience Music Alliance – pre-order available April 27), the Django Festival AllStars carry on that tradition in their own way, as modern-day virtuoso Samson Schmitt steps into the crucial lead guitar role long held by his father, legendary gypsy jazz guitarist Dorado Schmitt.

Attitude Manouche reveals that Samson Schmitt has inherited those vital qualities, and brings them to a thrilling new take on the gypsy jazz tradition. The Django Festival AllStars reinterpret Reinhardt’s vision through a set of new music that carries forward their namesake’s vision in a way that both honors his legacy while giving them a thoroughly contemporary twist.

While the AllStars’ name represents a community of gifted artists who collaborate in different line-ups depending on the performance, the quintet on Attitude Manouche have forged a distinctive voice together as all are featured soloist which join Schmitt. Ludovic Beier is a renowned accordionist and player of the accordina, Pierre Blanchard a virtuoso of the violin and Grappelli prodigy, Dou Dou Cuillerier – scat singer and rhythm guitarist, and the only Italian – Antonio Licusati on bass: five master musicians with their own innovative voices within this storied tradition.

“We have a great passion for playing music together and for trying to create a new sound,” Beier says. “Every musician is different, but we’ve succeeded in creating a common music together that lets everybody express ourselves very well. That’s really important and also very rare.”

The title of Attitude Manouche reflects the fact that while these French and Italian musicians may not share Reinhardt’s Manouche heritage by blood, they all reflect that heritage in their souls. That’s abundantly clear in the set of mostly original music that makes up the album, which fluidly and spiritedly combines the gypsy jazz tradition with influences from modern jazz, classical music, other world music, and even film scores.

The latter comes to the fore on the album’s sole non-original tune, the main theme from John Williams’ Academy Award-winning score for Steven Spielberg’s Schindler’s List. The All-Stars’ rendition not only moving renders an achingly beautiful piece of music, but pays heartfelt tribute to the gypsy people who were victims of the Nazi regime. “A lot of gypsies were deported to concentration camps along with the Jewish community,” Beier explains. “We wanted to pay tribute to that very dark period of history, so we decided to create an arrangement for that song mixing gypsy swing with Jewish traditional music, spearheaded by violinist Pierre Blanchard.” This track in particular coincides strongly with the mission of Resilience Music Alliance, founded by social and political activist Steve Ruchefsky, in celebrating the human driven condition of resilience.

The album opens with Samson Schmitt’s buoyant title track, which in itself is almost a mission statement, fully representing the classic gypsy swing sound but with a modern-day edge. “In that song we can recognize a lot of the gypsy jazz swing and harmonies,” Beier says, “but this is definitely something composed in 2018. It pays tribute to tradition but is open to our own time. That’s our attitude.”

Beier’s lively “Late Train” takes a similar approach, briskly combining the Reinhardt sound with ideas from ‘60s-era jazz greats like Wes Montgomery and George Benson. Another legend is paid explicit homage on “Around Toots,” as the accordionist pays touching homage to the late harmonica master Toots Thielemann, with whom Beier had the honor and pleasure of performing. “Laugh With Charlie” winks at the complex figure of filmmaker, comedian and composer Charlie Chaplin in a piece that combines jazz and classical influences with a necessary sense of joyous humor, composed by Samson Schmitt.

Other cultural traditions blend into the sound on tracks like the sultry “Troublant Romeo,” (also by Blanchard) a simmering tango that heats up for some intense soloing. Blanchard’s “Balkanic Dance” finds an unexpected common ground between the gypsy sound and Turkish folk music. The album closes with Beier’s “Tsigane Fantasy,” a reference to the band’s European heritage that takes its name from the generic European word for “gypsy.”

While audiences always thrill at the AllStars’ ability to take blistering runs at breakneck speeds, the band is equally adept at pulling at their listeners’ heartstrings. Take Schmitt’s “Lovely Wife,” a tender ballad that wrings maximum emotion from a plainspoken melody. “Nocturne” is another relaxed Blanchard tune that feels like the wind-down of a hectic day, the perfect soundtrack for a moment’s pause to reflect as the sun begins to set.

The Django Festival AllStars’ eclectic and forward-looking repertoire reimagines Reinhardt’s pioneering sound for modern ears, and in that way, is a fitting tribute to the icon whose name they proudly bear. “Django passed away more than 50 years ago,” says Pat Phillips-Stratta, who produced the album. “But I think if he was here today he would be exploring new fields and bringing them into his music. We add new experiences and new influences, but when the audience listens to our music they can hear Django Reinhardt’s legacy. That’s very important to us.”

The release of Attitude Manouche is preceded by a very special concert at Carnegie Hall in New York City on May 1. With Forever Django: Passing the Torch, the AllStars will celebrate the mantle being handed down from father to sons – not only Samson, but also his younger brother, guitarist Amati Schmitt. Both generations will share the stage along with special guests including GRAMMY® Award-winning vocalist Melody Gardot and top clarinetist Ken Peplowski. Additionally, up and coming vocalist Veronica Swift will appear as a guest. The concert will be dedicated to the late Ettore Stratta, the conductor, pianist, composer and producer who created the Django Reinhardt Festival along with his wife, Pat Phillips-Stratta. 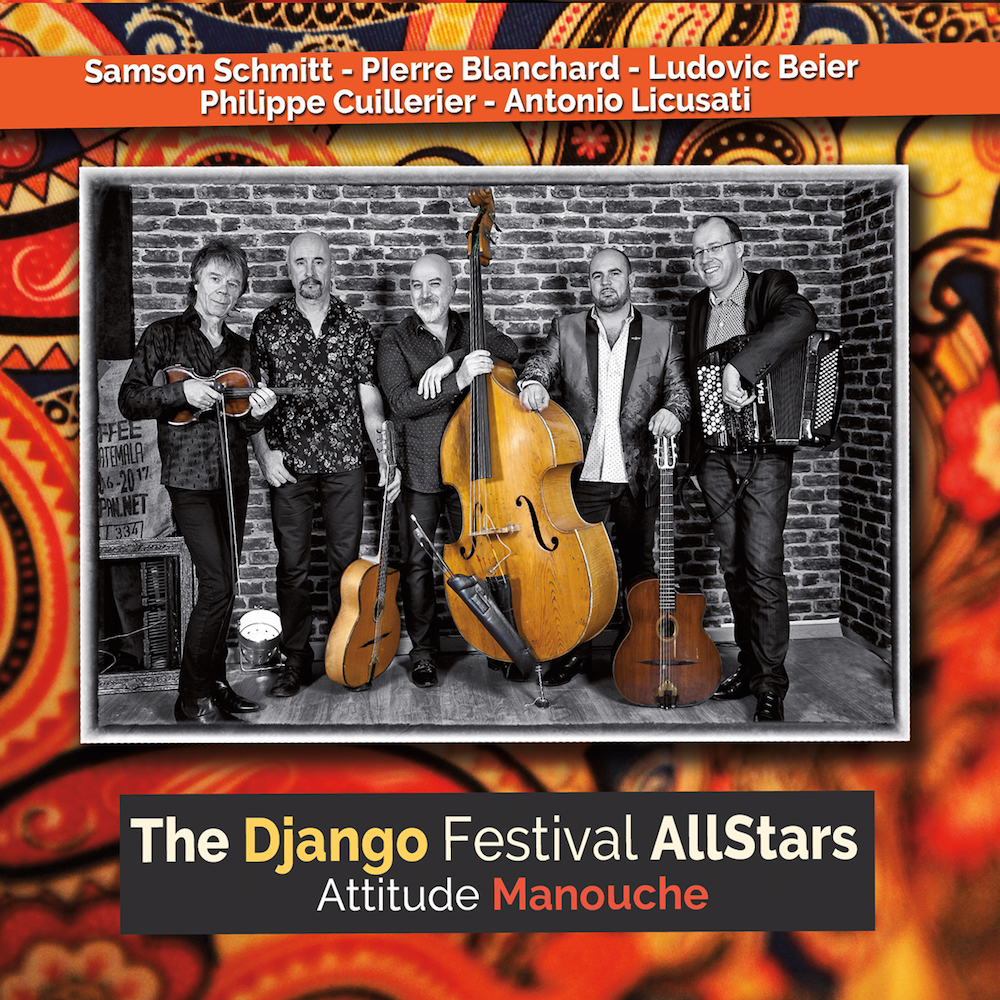